Wildcats keep pressure on in 81-35 win 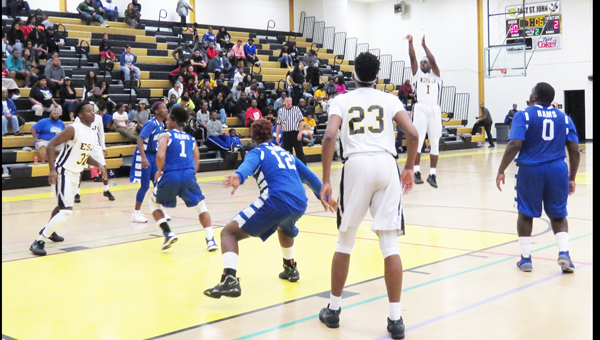 East St. John’s Troy Green No. 1, lets go of a jumpshot Monday during the Wildcats’ 81-35 victory.

RESERVE — As the third quarter was about to start on Monday night’s boys basketball game between East St. John and West St. John, the West St. John Rams were nowhere to be seen.

Just as the final seconds ticked off the halftime clock, the team finally emerged from the locker room. They had a lot to talk about.

By halftime of Monday’s game, the East St. John Wildcats had this game well in the bag. Actually, the Wildcats had it won in the first five minutes when they jumped to an 18-0 lead and never looked back on the way to an 81-35 non-district victory.

Ryan Cannon was the only Rams player to reach double figures. He finished with 12 points.

It was obvious early the Rams were no match for the Wildcats, who had a distinct size advantage. Plus, they played full-out from the opening tipoff, easily wearing the young Rams down. East St. John forced six turnovers in the first quarter, which led to 11 points. By the end of the first period, East St. John led 26-2. Wonzell Dumas scored the Rams’ only points with 2:12 remaining in the quarter.

The second quarter went much as the first, with East St. John outscoring the Rams 24-14 to take a 50-16 halftime lead.

East St. John coach Yussef Jasmine said he was pleased with his team’s showing — and its tenacity.

“I expected us to play well, and I thought we played well,” he said. “I thought, through the game, it’s kind of hard, once you get it going, to keep the focus. That’s why I had my players in there at the end, to try and make sure they keep the focus going into the next game. I thought overall we did pretty good. I told the guys before the game, regardless of the score, it’s all about us. We need to start playing better, and I thought we played better.”

East St. John (6-6) will play at Helen Cox this evening, then take a break until Jan. 5, when the team travels to H.L. Bourgeois.

West St. John, which started its season late thanks to football and is still getting used to first-year head coach Alton Joseph, fell to 1-5. The Rams don’t play again until Dec. 28 against Lutcher.

Riverside Academy started the season an uncharacteristic 0-3. The Rebels broke that streak this week at the Country Day Classic Tournament.

Riverside actually got its first win thanks to a forfeit from Walker-Landry, which was suspended from play in the wake of a bench-clearing brawl last week following a game against McDonogh 35. The Rebels then got their first win on the court Friday, defeating St. Thomas Aquinas 100-42 in tournament play. On Saturday, they defeated Central Lafourche 75-51.

On Monday, Riverside got a revenge win against Scotlandville, 53-51. Scotlandville defeated the Rebels 67-55 on Dec. 15.

The Rebels (4-3) advanced to the semifinals of the Country Day Tournament against Karr, which was played Tuesday night after press time.

St. Charles Catholic had a solid showing in the weekend’s Runnels Tournament, losing to the host team Runnels by 1, 43-42, on Friday and then coming back with a 51-37 win over Maurepas on Saturday. The Comets were 5-6 heading into a Tuesday night game against Grace King.