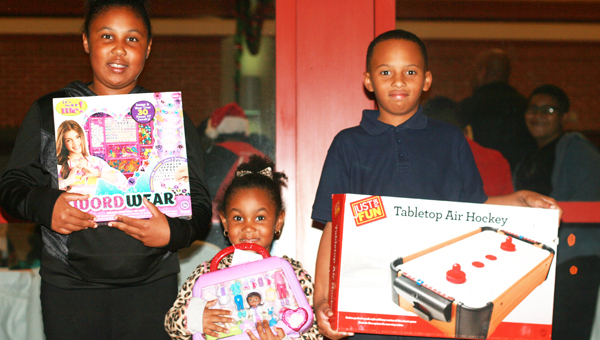 Aaliyah Lorio, left, stands next hersister Cylie Lorio and brother Dyron Lorio Wednesday night at the St. John the Baptist Parish Community Center. The family participated in the second annual Evening of Song and Toy Giveaway. Each child got to pick out one toy that was donated by local organizations. (By Raquel Derganz Baker/L’Observateur)

LAPLACE — It was standing room only Wednesday night as more than 300 families gathered in the St. John the Baptist Parish Community Center for the second annual Evening of Song and Toy Giveaway.

“This all started with an idea,” JoAnn Proctor said. “I wanted to bring the library and the community together. I said ‘lets have a Christmas program,’ and I named it Evening of Song. Last year, the library, the School Board and a non-profit got together to have the event, and it was held at the library.”

Proctor is the central library branch supervisor, and last year she said the library wasn’t big enough to hold everybody. According to Proctor, they “were bursting at the seams” in 2014.

This year, with the help of Parish Government, the event was held at the Community Center.

Children could stop by different tables in the hallway to make cards and different things out of candy. Each library in the parish was represented, and children could make different crafts at each table.

Proctor was appreciative of all of the parish groups that came together to put on the event. She said it was nice to see her vision of bringing the community, library and their many resources together being realized.

“It’s inspiring that so many people have come on board to be a part of this,” she said. “We reached out. People heard about it through email and word-of-mouth and to have so many people come here is just awesome. The committee that worked on this event is also awesome.”

The evening started with opening remarks from different officials who helped put the night together before the entertainment began.

As the night went on, it was obvious the smaller children in attendance were getting antsy, because for them, the highlight of the night had not happened.

For the last part of the night, children of families that registered and received a number were able to pick out one toy provided through donations.

This was the first year Tanzer Lorio and her three grandchildren participated. Out of 310 families, Lorio and her family were family No. 4. Lorio said she first heard about the event from her sister, who knows Eliza Eugene from Blessed To Be A Blessing, the group that led the effort to collect the toys.

“It’s always nice when people are able to give back,” Lorio said. “With all of the people here, we were blessed to be No. 4.”

Lorio’s grandchildren seemed happy with the toys they picked out.

“To me, it means happiness and joy,” said Dyron Lorio, 10. “The lady helped me pick out my air hockey table. I like air hockey.”

Dyron’s sister, Aaliyah Lorio, 9, picked out a bracelet-making kit, adding she was looking forward to making some bracelets for her friends.

The youngest in the group, Cylie Lorio, 4, got a Doc McStuffins toy. While she didn’t say much, the smile she had on her little face proved she was excited.

According to their grandmother, the children asked if they could open one gift before Christmas, and as soon as they got home, they were allowed to play with the toys they received from the event.

“It’s always good to see your grandchildren get a gift, especially when you know things with their parents are tight,” Lorio said.

“For them to get a little extra something makes you feel good to know that someone opened their hearts to make sure some kids got a gift. I can’t say thanks enough, because we were blessed tonight. Trust me, I’m going to go out and bless somebody else.”