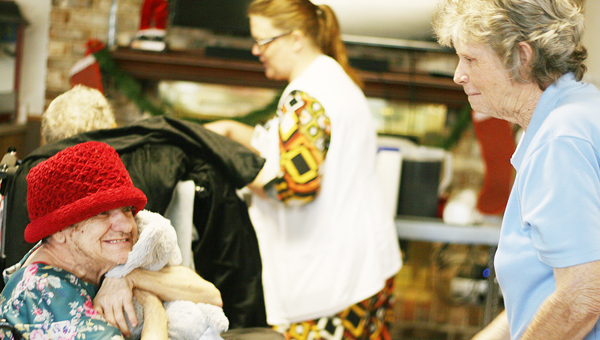 LAPLACE — After months of working to keep her promise, Debbi Tamplain was able to make a few local Alzheimer’s patients smile.

In October, Tamplain, through AVON, was selling stuffed elephants and collecting them to give to Alzheimer’s patients with the idea “an elephant never forgets, but people with Alzheimer’s do.”

Tamplain was able to visit two nursing homes Thursday to donate the elephants. She gave elephants to Alzheimer’s patients at Southeast Louisiana War Veterans Home in Reserve and Twin Oaks Nursing and Convalescent Home in LaPlace.

Twin Oaks administrator Karen Connor was thrilled her patients were able to receive the stuffed elephants. Connor said Tamplain started the elephant effort before she started working at the nursing home a few months ago.

Connors said Twin Oaks is all about community, adding it always delights her when people in the community are interested in being a part of the nursing home community.

“They’re adorable,” Connor said. “They are so soft. The patients reacted pretty much the way you would expect. They seemed pretty happy to get something new, like always. One of the charming things about Alzheimer’s patients is that almost every day is a new experience, even the same old stuff. So when they get something new, it can be pretty exciting.”

Connor said it’s nice the patients will be able to re-meet their elephants each day.

“The happiness of the people for whom I care for is paramount,” she said. “There is no greater calling than to create this community that is the nursing home.”

After handing out the elephants to the residents who were able to make it to the front and the ones unable to leave their rooms, Tamplain had a big smile on her face.

“We gave out 43 elephants at Twin Oaks,” Tamplain said. “We also had 43 at the War Veterans Home. It feels good seeing all of the happy faces and seeing them light up.”

Tamplain had her mother, father and husband with her to pass out the elephants.

The Alzheimer’s effort is important to Tamplain because of her mother. In 2011, Tamplain’s mother, Barbara Wise, was diagnosed with Alzheimer’s.

Tamplain, an AVON representative, first saw the stuffed elephant, Eduardo, in a fundraiser flyer put out by AVON.

When she started out, Tamplain wanted to donate some stuffed animals to Ormond Nursing and Care Center.

“I was hoping to do Ormond, as well, because I think they said they had 65 patients but it didn’t’ happen,” she said. “But things did come together where we were able to take care of at least two nursing homes.”

Tamplain said she plans to have a similar fundraiser next year and make sure every patient gets a stuffed animal.