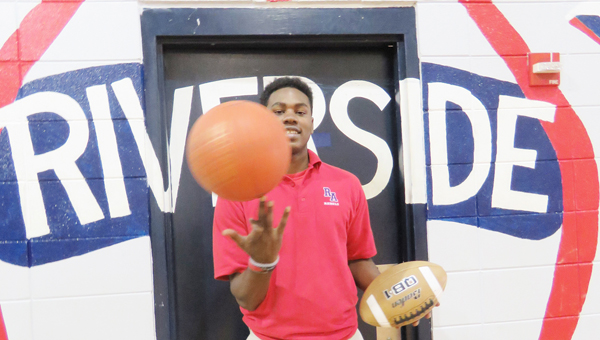 Riverside Academy’s Herb McGee is one of many River Parishes athletes who are making the transition from football to basketball this month.

RESERVE — Riverside Academy’s Herb McGee is not used to losing on the playing field.  So he didn’t take too well to getting a double dose of it in recent days.

On Dec. 4, McGee was part of the Riverside football team that lost its bid for a state championship to Notre Dame of Crowley, 13-3, in the Mercedes-Benz Superdome.

On Tuesday, McGee and several of his football teammates were stung again when the three-time defending state champion basketball team lost its season opener at home to West Jefferson, 58-49. The Rebels had not lost a game to an in-state opponent in nearly three years — since McGee was a freshman.

Byrd brushed that off.

“We had one practice,” he said. “We weren’t in any kind of basketball shape at all.”

As much as that loss may have stung, however, McGee said he enjoyed just being on the court days after losing the biggest game of his football career (so far).

McGee did love football, though. Known throughout recruiting circles as a stellar wide receiver — he was named to the Class 2A All-State football season last year with 47 receptions for 713 yards and 13 touchdowns — he was pressed into service as a quarterback this season after projected starter Jordan Loving and backup Jared Butler were injured.

McGee led the team through the first four games and filled in at spots for the rest, passing for 724 yards and seven touchdowns and rushing for 405 yards and four touchdowns through the Rebels’ semifinal win over St. Charles.

His receiving totals dropped to 301 yards with three scores.

Now, he’s trying to get himself back into basketball shape so he and his teammates can chase another state title.

“Last year it took us until almost mid-season,” McGee said. “We have to start winning games before we can start talking about winning a state championship. We have to find out who we are.”