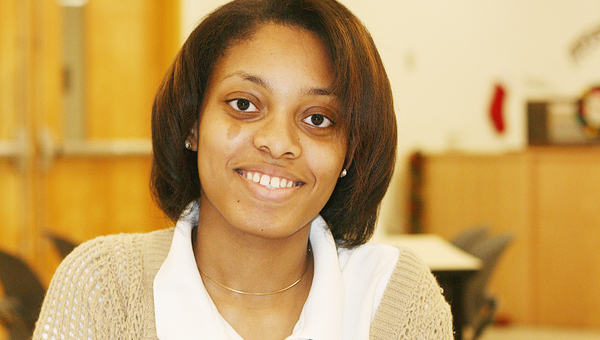 Crystal Dabney is a senior at East St. John High School with plans to become an accountant after college.

“(Dabney) is a goal setter,” Jones said. “She is very exact and precise about things. She is very meticulous to details, but for a business student that makes sense.”

Dabney, a 17-year-old senior at East St. John, hopes to be an accountant.

“The meticulousness that is her personality fits with the career that has chosen her,” Jones said. “Her drive is what makes her special. She has impressed me since her tenth grade year, because she has the same drive and the same determination. She has been very specific in the goals that she has set, laid out the path to get there and has followed it to the letter. There is no doubt that she will be successful. She will meticulously decide what success is.”

In Jones’ eyes, Dabney is a hard working individual.

Academically, Dabney is already a success; she currently has a 3.99 GPA and is ranked as the No. 3 student at ESJH. She is also on the principal’s list with all As and has been on honor roll for as long as she can remember.

“My favorite subject is math,” Dabney said. “It’s just so easy and amazing. Math can do so much more for other people like when it comes to engineering, and space math plays such a big part in everything we see today. I really love it.”

“Those are the types of things engineers use to build everything that is around us,” Dabney said. “I find it extremely fascinating that you can go from this one problem to making this amazing, big beautiful building or bridge.”

Dabney has taken her love of math from person success to a focus on others. She tutors free of charge for her classmates and helps college students with college algebra or calculus.

“I do it because I love seeing people do better,” she said. “When I can make a difference in someone’s life, that touches my heart and makes me feel good about myself.”

Dabney is also involved with the Interact Club, Future Business Leaders of America and was previously a member of the Beta Club.

She said Future Business Leaders prepares her for a career in the business world.

“You can win scholarship money by competing, and by competing, you’re studying and enhancing your knowledge,” Dabney said. “With Interact Club, I’m helping out with the community, which is really great. I get to spend time with the elderly. We go to the nursing home near St. Charles Catholic and help with bingo nights. Then on Thanksgiving and certain holidays, we all go to East St. John Elementary and provide people with a free meal and bingo. With volunteering, you don’t always get the recognition and that’s fine because I get a personal reward on the inside.”

She uses a “nice, big old planner and three calendars” to keep things nice and organized.

Dabney is inspired to do well in school and community by her grandmother.

“I would see her help everyone without asking for anything in return,” Dabney said. “She says, ‘Even though I may be struggling, I’m spiritually wealthy.’ From her, I see helping others can be emotionally and spiritually rewarding.”