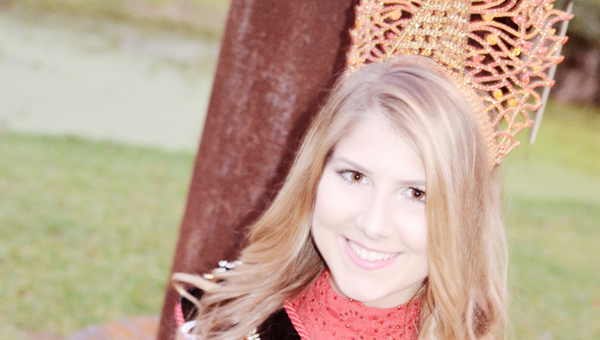 Erin Monica of LaPlace was crowned Miss Festival of the Bonfires XXV in 2014.

According to Monica, a few years ago, because it could be covered under insurance, the Bonfire Pageant was no longer just for St. James girls but open to St. John, as well.

After entering the pageant for the first time in 2014 in the Miss division, Monica was crowned Miss Festival of the Bonfires XXV. She said being the first St. John girl to win the title meant the world to her.

Erin Monica and Kamryn Deslattes take a moment for a picture before the LaPlace parade.

“To me, it wasn’t about the crown and the banner, it was about so much more than that,” Monica said. “A lot of people don’t know about the traditions that we have or why we have it, and it was really important to me to teach other people why it’s important and what it means to us.”

During the pageant, Monica also received the Sparkler Award, which is like a Miss Congeniality award.

Monica said she literally dropped to the floor when her name was called as the Miss Queen.

“I had no idea that my name would be called,” she said. “It was so unexpected but also such an amazing feeling to think that those five judges saw something in me that would make me a good representative.”

“The Miss Queen is invited to other pageants, fairs and festivals around the state of Louisiana,” Monica said. “They go and promote and teach others about the traditions. Whenever I was crowned, I immediately started getting Facebook invites and messages about other events that I was invited to.”

When she took the crown, Monica signed a contract saying she would attend at least 15 events. Being a senior at St. Charles Catholic, she said it was sometimes hard doing things on weekends but she learned to balance her schedule.

Monica, along with her Teen Queen, first attended the festival they represent along with others like the Hurricane Festival in Cutoff, where they “cut up” the whole car ride there.

The Queen also went to the St. John Sugar and St. James Sugar Pageants and the Andouille Pageant. Monica also had the opportunity to attend a few balls.

“I went to three balls,” she said. “I went to the Gumbo Ball in Bridge City, the Orange Ball in Buras and also the Strawberry Ball in Ponchatoula. The Strawberry Ball was really cool, because they could only invite the Queens, and only a certain number of girls could come. It’s a really big deal to be invited out of hundreds and hundreds of Queens around the state. They could only invite, maybe 25, and to think that I was one of them is so cool to think about.”

Monica and Teen Queen Deslattes, 15 of Paulina, have become very close over the past year.

“She is now one of my best friends,” Deslattes said. “Erin and I are a Queen match made in heaven. I don’t think you could have paired me up with anyone more perfect.  The day before the pageant at practice was when I first met her, and I could already tell that if we didn’t win we were going to be friends.”

Deslattes said they are two peas in a pod.

“The Bonfire Festival weekend was great, and I couldn’t have asked for a better time with anyone else by my side,” she said. “At the festival last year, it was Saturday night and we had already lit the bonfire and were sitting in our Queens booth. We thought ‘You know, we’re tired. Let’s just sit down.’ Then we looked at each other and were like ‘No, this is our festival, we’re going to have fun.’ So we took off our crowns and went to ride a bunch of rides. I remember going on this one ride, and we made Snapchat videos. It was such a fun moment. That was probably my favorite part of the festival.”

Community members are welcome to attend this year’s Festival of the Bonfires, which takes places Friday through Sunday at Lutcher Recreational Park.