Giving Back: Volunteers deliver meals from the heart 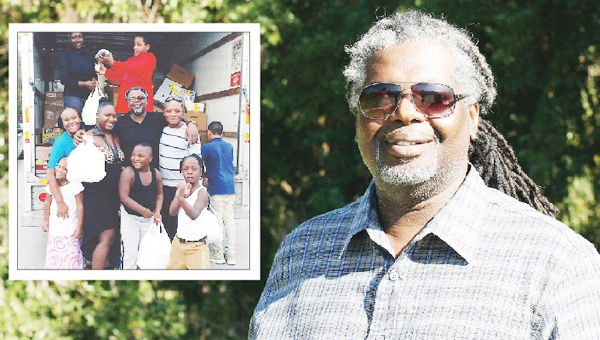 John Swafford Jr. and his father, John Sr., started handing out Thanksgiving dinners to the less fortunate 13 years ago. The effort has grown in the last decade, leading to this year’s Thanksgiving Day effort, inset picture in Reserve, which produced 1,400 meals.

LAPLACE — To John Swafford Jr., the meaning of Thanksgiving is the expression of gratitude, especially to God.

Swafford also believes it’s a day when family and friends gather to share, in many cases, an abundance of the harvest. Thirteen years ago, Swafford and his father, John Sr., realized not everyone was privileged enough to have a meal with “a turkey and trimmings,” so the father-son team decided to do something about it.

Swafford he prepared Thanksgiving dinner at his house one year and had a lot of food left over that he didn’t know what he was going to do with it.

“I was going to throw it away, but then my father told me there were a lot of people that wished they had food,” he said. “I asked, ‘What should we do and where should we go.’ We decided to go to the Reserve Housing Development.”

The men thought it would be a nice gesture to feed a few people so they prepared approximately 100 dinners for the less fortunate.

“Through the years, family and friends heard about it and different people got on board,” Swafford said. “There are people out there who feel the way I feel and hear about kind acts like this and want to be a part of it. It started growing from 200 dinners to 400 to 600. (In 2014,) we did 900 dinners.”

Even though his father had passed, Swafford continues the work of delivering meals door to door to the less fortunate residents in St. John the Baptist Parish.

“Personally, it’s very self gratifying for me to be able to help somebody,” Swafford said. “As God has blessed me, I just feel the need to bless others and be a blessing to others.”

With a group of volunteers, the Friends of St. John delivered 1,400 to diners this year residents on the West Back, Reserve, Garyville and LaPlace.

A group started to gather at 4 a.m. at Mt. Calvary Baptist Church in LaPlace to prepare the meals this Thanksgiving.

“We had turkey, rice dressing, green beans, salad and dinner rolls,” Swafford said. “The night before I cook all of the rice dressing. This year, we had 80 turkeys. We carved them, and that morning at the church we cook everything else. The volunteers normally get there around 7:30 a.m., and we are ready to start preparing the plates. Then we put the meals in a U-Haul and visit the less fortunate.”

Tonia Snyder, one of the volunteers with Friends of St. John, said this was her first year working with the group, but it wouldn’t be her last. Snyder helped box the meals, bag them and put them on the truck.

“John (Swafford) asked me to help out on Thanksgiving to prepare meals for needy families,” Snyder said. “I told him that I would love to help. I went with my children and some of their friends and we lended a hand. The act is such a blessing, and it’s so heartfelt. It got me all hyped up to do more.”

From what he has seen, Swafford believes the people who receive the meals are grateful.

“A lot of them are waiting on us, and a lot of people are counting on us,” he said. “There was one lady in the Reserve Housing Development when we walked to her door, she said ‘We’ve been waiting on you. We knew you were coming.’ They are just used to me coming now. We look forward to serving God’s people next year, as he continues to use us as vessels for His glory.”