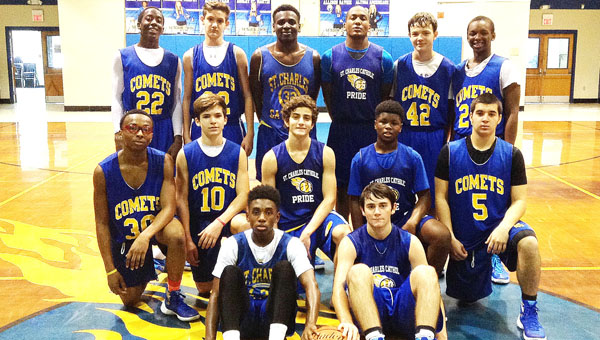 LAPLACE — When one thinks of St. Charles Catholic sports, it is often the football or baseball teams that come to mind, but second year head basketball coach Kemper Todd is working to have Comets basketball brought to that discussion.

While Riverside Academy — who the Comets will face twice this year in district match-ups — has boasted a strong basketball program for several years, the sport at St. Charles Catholic has often been something of an afterthought.

Todd is looking to change that but knows he has his work cut out for him.

Since 1989 Todd has been a head basketball coach, serving most recently atop the basketball program at his alma mater Isidore Newman before joining SCC last season.

In Todd’s first year the Comets turned in a lackluster 6-20 record.

“To go into the summer having only won six games on the season, that could have been very discouraging to anybody,” Todd said. “But they went into the summer months and committed to doing it right. When lot of people were are the beach and hanging out, they were in the gym trying to get better, and that just tells me they are beginning to understand.”

This is not the first time Todd has been in this situation. In the mid-90s he took over the UMS-Wright basketball program in Mobile, Ala., taking the squad from a 3-21 record to a state championship in only four years.

Todd is hoping for the same type of turnaround at St. Charles Catholic.

“These guys have really figured out that if they work hard they’e are going to have successes,” Todd said. “So for me it has been a real joy to see them grow, not only on the court but the type of growth as young men by being disciplined and by committing to something bigger then themselves. It has been a real joy, and I think the win and loss success is going to come.”

In particular, Todd said his players have already begun to take the game more seriously.

Todd approaches basketball as a discipline and requires his players do so, as well, by adhering to a system he has been successful with elsewhere.

“We are going to be fundamentally sound,” Todd said. “But if you ask anybody, they are going to tell you that my system is going to be a motion offense and a man-to-man pressure defense. We are not going to do anything that we can’t do. We are going to keep it simple and do the few things that we know how to do and do those things well, eventually.”

In the first game of the 2015 season Todd’s influence on the Comets basketball program can be really seen.

After only winning six games all of last season, Todd said coming out of the gate with a victory was a relief, especially since many of his players are still devoting time to football.

“We’ve come a long way and obviously still have a long way to go,” Todd said. “But what I really like about this team is they have learned how to work hard, work smart and work together, and I think it paid off when we got to face someone other than ourselves.”

Although Todd has seen a change in only one year, he said he is looking more to the long term.

“I don’t believe we are on the map yet so to speak,” Todd said. “But I know that we will be because the kids are not settling. The things you see in our football programs and our baseball programs are starting to happen every day, and it is already established in those programs and these kids are now realizing they can do it too. It is going to come a little further down the road, but it is going to come.”

The Comets next basketball game starts at 7 p.m. Monday at home versus Maurepas. The Lady Comets tip off at 6 p.m.