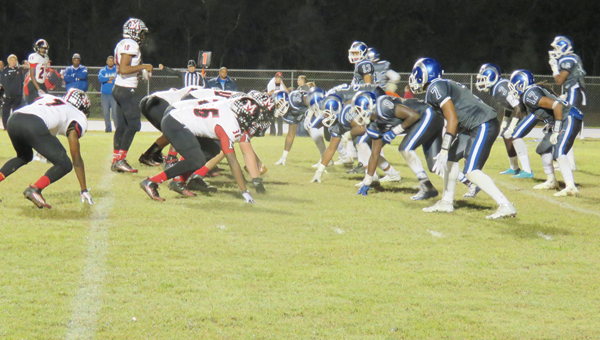 When West St. John High School, top right, lined up against Many last week in Reserve, head coach Brandon Walters said he knew his Rams could do the things needed for victory. WSJ coaches and players are hoping for the same thing this week when West St. John hosts the Mangham Dragons in the Louisiana 2A football playoff quarterfinals.

EDGARD — The West St. John Rams have made an improbable run in this year’s playoffs, leading them to a quarterfinal showdown Friday against the Mangham Dragons.

The No. 17 seed Rams (5-7) were something of an afterthought heading into the postseason, having lost seven out of eight games to end the regular season. But, with wins in the first two rounds of the playoffs, including a statement 34-30 victory last week over No. 1 seed Many, the Rams look to match their regular season win record by notching their third straight victory when they host Mangham (8-4) at 7 p.m. Friday in Edgard.

“I think a lot of people were surprised (we beat Many,) but we weren’t,” West St. John coach Brandon Walters said. “Inside what we were doing, we expect to win. We expect to beat them. We looked at some things they were doing on film and we just figured the way we matched up would be favorable for us.”

While the regular season was an ugly one for the Rams, Walters said he has never taken his eye off the team’s long-term goal.

“Even in spite of all the things we’ve been through this year, my goal has been the same, to go into the playoffs and make a run at the championship — that is the goal,” Walters said. “We are definitely peaking at the right time. It has been tradition around here, the kids become a different team during the playoffs and they understand what it takes to get deep into the end of it.”

In the win over Many all aspects of the Rams offensive game came together. Running back Lamore Boudoin rushed for more than 150 yards, receivers Jamal and Jabari Walters and Daquan Franks picked up a number of receptions from quarterback Jemoine Green.

Walters said his team could not have responded better in the postseason so far.

“They have been doing everything that is asked of them,” Walters said. “The execution has been there. We could be more consistent with what we are doing, but overall they are playing pretty well.”

Against Mangham, Walters is hoping the Rams stay on track. However, that will not be easy.

Mangham is well known for its prowess in the running game, having put up nearly 3,800 yards on the ground along with 58 rushing touchdowns this season. In contrast, Mangham has averaged fewer than six pass attempts per game on the year.

“Mangham runs a variation of the Wing T, like many teams up north do,” Walters said. “You’ve got to stop the run against Mangham — they run the ball pretty well. So it will be a lot of misdirection. We are just going to be ready, we are going to be prepared and come at them.”

This is the second recent playoff matchup for West St. John and Mangham.

“They are a team that beat us in the semi-finals two years ago when we went up there,” Walters said. “They come down here to us this time, and we are definitely looking forward to returning the favor.

“(Having the game at home) is going to definitely be a plus for our kids. We are going into the backyard and do what we do, so to speak. It is always a good thing to play at home.”