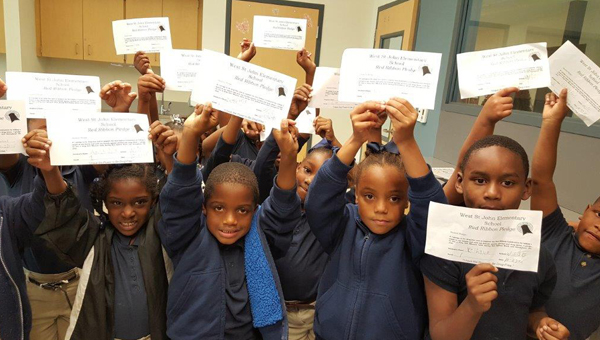 The campaign creates an awareness concerning the problems related to drug use and supports the decision to live a drug-free lifestyle.

Each school planned events throughout the week of Oct. 26 that included students signing pledges to live drug free. Some events included:

Emily C. Watkins Elementary School held a pep rally and pledge signing for fifth- through eighth-graders, while kindergarten through fourth-graders viewed a video on substance abuse.

Fifth Ward Elementary School went Crazy and Drug Free for October, with activities such as crazy socks and crazy hair days. The school’s faculty talked to students about the importance of being drug free.

Garyville Mt. Airy Math and Science Magnet School students and faculty wore red and had themes including Smarties Don’t Do Drugs, with students wearing ties with their school uniforms and a dress down day.

West St. John Elementary School students took the pledge to be drug free and had theme days such as “Let’s Scare Away Drugs,” when they dressed in costumes, and “I’m Too Bright for Drugs,” when they wore sunglasses.