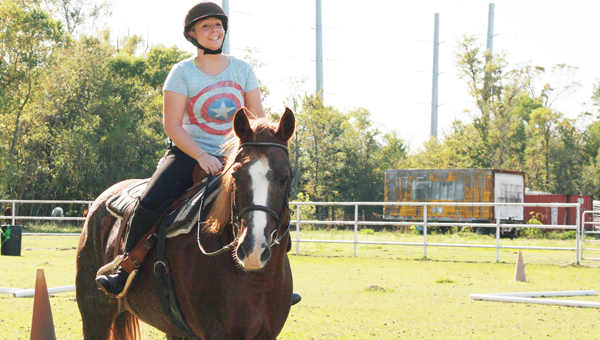 Lindsay Patchett, left, rides Leroy Friday at the Greater New Orleans Therapeutic Riding Center in LaPlace. She began volunteering at the Center a year ago because of her love of children and animals

When someone thinks of a therapist they might picture a human being, but Anita Hefler might disagree.

“We aren’t the therapists,” Hefler said. “Our horses are the therapists, the four-legged therapists. They are the ones that do all the work; we just walk along and facilitate it.”

Greater New Orleans Therapeutic Riding Center in LaPlaceis the brainchild of Anita Hefler, picture with Bambi, who opened the gates in 1993.

Hefler is the executive director and founder of the Greater New Orleans Therapeutic Riding Center, which opened its gates in 1993.

Hefler first became interested in therapeutic riding after going to a horse show in Oklahoma.

“They brought all their riders out and they riders needed complete assistance — with two side people and one leader, and they also had completely independent riders,” Hefler said. “They were just so proud to be there. I will never forget those faces. It inspired me to check it out because it was something I wanted to do.”

The riding center is located at 152 Shadowbrook Lane in LaPlace. The center is home to a donkey and seven horses, including Hefler’s favorite, Bambi.

“Horse movements are very unique,” Hefler said. “It’s the most similar to the human walking gate. Kids that don’t walk very well or don’t walk at all get normalized movement. They also build upper body strength and work on balance and coordination.”

Rising a thousand-pound horse and controlling it is very empowering for the child and adult riders, Hefler said.

“We aren’t in a clinical setting at all,” she said. “This is very therapeutic and it doesn’t feel like it’s therapy. It’s just something fun. Initially, they are a little bit timid when the see the horses, but most of them, when they see the animals, are enthralled and go right to them. To them, this is their farm. If say Joe comes, then this becomes Joe’s farm.”

The riding center helps children and adults suffering from different disabilities such as muscular dystrophy, cerebral palsy, visual impairments and down syndrome, among others.

All of the horses used for the classes have been donated, and in Hefler’s mind, she feels the animals know they are doing good work.

“I think in a sense (the horses) feel that they are no longer wanted or needed,” she said. “But when they come here, they know it’s an important job and they really rise to the task. They can’t say it in words but they show it in their behavior.”

Riders do different activities with their horses like groom them, tack them and perform activities in class.

When asked what her favorite part of the job is, Hefler answers without much hesitation.

Lindsay Patchett has been volunteering at the riding center for almost a year. She first got involved with therapeutic riding when she lived California.

When she moved to Louisiana, Patchett volunteered at the center because she likes children and horses.

“I like to see us actually make a difference in the kids’ lives,” Patchett said. “We had one kid come in that couldn’t hold his head up on his own, then after working with us, he was able to sit up there and hold his head all on his own. It was insane. I thought I would never see something like that.”

Because the Greater New Orleans Therapeutic Riding Center is a non-profit organization, organizers rely on fundraisers and donations to aid riders and care for the horses.

The Center’s next fundraiser — Christmas in the Crevassee — takes guests on hayrides around the grounds to see approximately 80 Christmas displays on the farm.

Opening night is Thanksgiving, and then rides are scheduled from 6 to 10 p.m. each Friday, Saturday and Sunday through Jan. 1.

Keller: Alcohol abuse hurts many with its impact