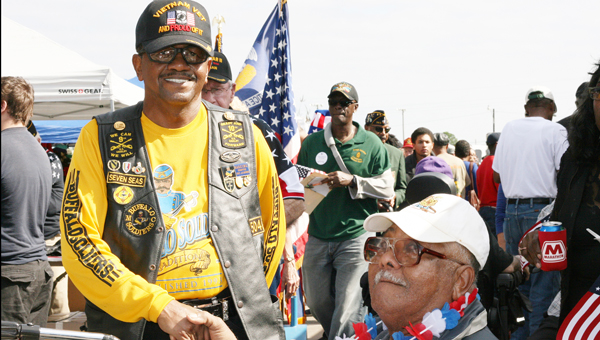 RESERVE — It’s always nice to find something in common with a stranger, like finding out you grew up in the same city, fought in the same war and belong to the same group of “forgotten heroes.”

George E. Jones and Wayne Howard have those things in common, both men were born and raised in New Orleans, fought in Vietnam and are Buffalo Soldiers.

The two met in 2014 during the St. John the Baptist Parish Veterans Day parade. Jones was the Grand Marshall and wore his military uniform with all of his medals, and Howard wore the colors of his riding club — the National Association of Buffalo Soldiers and Troops Motorcycle Club.

Club members make it a point to visit the Veterans at the Southeast Louisiana War Veterans Home in Reserve for Veterans Day.

As black men, each are proud to be Buffalo Soldiers.

“African Americans have fought in every American war,” Jones said. “After the Civil War, Congress passed a resolution in 1866 making six units of black soldiers: two cavalry, the ninth and 10th and four infantry, 38th, 39th, 40th and 41st. Buffalo Soldiers usually fought in the West. People were scared of the Native Americans; they actually got their name from the plains Indians, because the hair on their head looked like the hair between the horns of a buffalo. The Buffalo Soldiers would fight the Native Americans, they weren’t afraid of them.”

Both men were back in each other’s company during Wednesday’s Veterans Day Parade, which rolled through LaPlace and Reserve and concluded with a ceremony at the Southeast Louisiana War Veterans Home.

Besides being in the Air Force for more than 20 years, Jones, who lives at the Veterans Home, said he is the descendent of a Buffalo Soldier.

Howard is a second generation Buffalo Soldier and Army Veteran.

“My father was in World War II,” Howard said. “I was in the Vietnam War, and my son is the third generation of Buffalo Soldiers, and he was in Desert Storm. It’s always an honor to meet (Jones,) who came before me and exemplified the way of Buffalo Soldiers.”

According to an informational card passed out by the club, the nickname Buffalo Soldiers began with the Cheyenne warriors in 1867.  The actual Cheyenne translation was Wild Buffalo. The name was given out of respect for the fierce fighting ability of the 10th Cavalry. Over time the name has become a generic term for all black soldiers.

Having served in the military and having the ability to return home makes Veterans Day special to the men.

“It’s important in America for people to honor the Veterans,” Jones said. “But the ones that deserve the real honor are the ones that didn’t come home. I had a lot of friends that were killed in the military. Their blood was shed for this country, but it’s shed on different grounds; it wasn’t shed on American soil.

“It’s shed in places like Korea and Vietnam. I want the people to not honor me, but the ones who have paid the ultimate price. Korea wasn’t that bad, but in Vietnam I had a lot of friends go in and lose their lives. They were some of my best friends. Freedom is not free.”

Howard mirrored Jones in saying many lives were lost in Vietnam.

“Because I served in the military, Veterans Day is an honor and a privilege,” he said. “It’s for the ones who have served and the ones who are serving now. It’s an honor to be here to be able to celebrate all Veterans of all Armed Forces.”