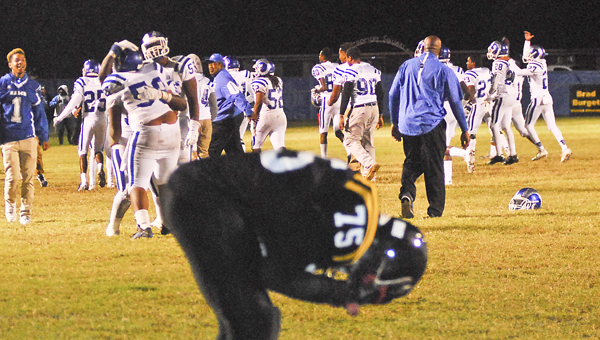 Overcome with emotion, Mitchell Washington realizes the season is over with the Ferriday Trojans losing in overtime to West St. John. (Tim Givens/The Natchez Democrat)

As the playoff football teams in St. John the Baptist Parish went, so did those from the rest of the River Region.

That was trouble for opposing teams.

The seven victories set up an exciting round of football next week, and football fans in St. John, St. James and St. Charles Parishes have a lot to look forward to.

FERRIDAY — West St. John and Ferriday each went three-and-out late in the fourth quarter of their playoff game Friday night, setting up the most exciting finish in Louisiana.

A poor Ferriday punt gave the Rams the football on the Ferriday 41-yard line with 27 seconds to play down six points on the road.

Coach Brandon Walters had his Rams were more than prepared.

Quarterback Jemoine Green quickly connected with Jabari Walters on a medium gain before a late hit out of bounds placed the ball on the 19-yard line.

Two plays later, Green found a wide-open Walters down the sideline for the score, and the extra point that followed was missed to send the game — 14-14 — into overtime.

It took West St. John four plays to punch it into the end zone in the overtime period.

A one-yard Kylon Duhe rush and the extra point that followed gave the Rams a 21-14 advantage.

The Trojans answered on the first play of their overtime possession, with quarterback Ronald Williams finding Ja’Shon Foster on a slant for a 10-yard score to bring the Trojans within one.

The Trojans went for a two-point conversion and the victory, running a quarterback keeper but were stopped a yard short, prompting the home seniors to collapse on the field in agony and the visiting Rams to celebrate an amazing victory.

Ferriday failed to take advantage of good field position most of the night, because a strong Rams defense forced four turnovers in total.

Ferriday finishes its season at 5-6.

West St. John improved to 4-7 and will face No. 1 seed Many next week in the second round of the Class 2A State Championship bracket.

LAPLACE — SCC head football coach Frank Monica had his team prepared to play a full four quarters of football Friday night, and the Comets needed all of it as they outlasted a tough Opelousas Catholic squad, 14-0.

The visiting Vikings held the Comets scoreless through three quarters, but a dominating and consistent Comets attack eventually broke the Vikings’ backs.

Opelousas Catholic appeared poised to take control of the game in the second half when the Vikings lined up for a field goal; however, it was missed and the outcome remained in the balance until the fateful fourth quarter.

SCC’s two scores came on touchdown runs, one from Eric Lewis on a 1-yard plunge and the other from Lloyd Nash on a 14-yard scamper.

St. Charles (9-2) moves on to play undefeated Madison Prep Academy (11-0) next week in the quarterfinals of the LHSAA’s Division III bracket.

RESERVE — Riverside coach Bill Stubbs and his driven Rebels football team continued their dominating run of 2015 with a workmanlike 55-8 win Friday in Reserve over visiting No. 16 seed Northlake Christian.

Riverside opened the game on defense and held Northlake to a three and out before getting the ball back in the hands of the RA offense.

The eventual result was a Brandon Sanders 16-yard touchdown run and a 7-0 RA lead.

The first quarter finished with the Rebels leading 21-0, and the game continued in RA’s favor from there on out.

Herb McGee hauled in four receptions for 90 yards and a touchdown, in addition to running for 64 yards.

The Rebels defense held Northlake to 121 yards of total offense, with most of that coming against Riverside’s second unit in the game’s second half. Evan Veron led the team with two sacks, and Jared Hymel added a sack. Kendal Martin recorded an interception.

With the victory, Riverside (9-1) moves on to face Newman (8-2) in the LHSAA Select Prep Classic Division III quarterfinals.

In other River Region action, No. 1 seed Lutcher defeated Avoyelles 34-8 and will play Wossman in the second round of the Class 3A state playoff.

St. James High also advanced to the Class 3A state playoff second round with a 34-21 victory over Green Oaks Friday night. St. James next battles Eunice.

In St. Charles Parish, No. 3 seed Destrehan defeated Denham Springs, 44-23. Destrehan moves on to face No. 14 Barbe in the Class 5A state playoffs.