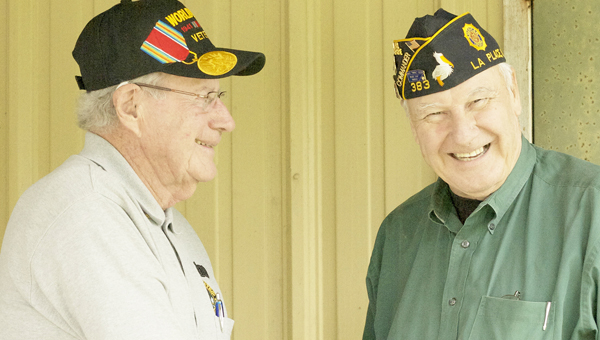 American Legion Post 383 Sergeant-at-arms Benny Robichaux and Unit Commander David Gatt share a handshake outside L’OBSERVATEUR Monday afternoon. They are two of 70 to 80 members who meet monthly in St. John the Baptist Parish.

The meeting marked the first time, according to Gatt, Legion members held their official meeting at the Veterans Home in Reserve.

“It’s the only meeting (Veterans Home residents) get a chance to go to, militarily, and they were delighted to be sitting there in the front row,” Gatt said. “I’m sure there will be more at the next meeting.”

Legion members meet the third Thursday of each month, and local officials said those meetings are now scheduled to take place at the Veterans Home. The next meeting is Nov. 19.

Gatt, unit commander for the local American Legion post, said the post averages 70 to 80 people per meeting. He said it means a lot for Veterans Home residents to interact with active members of the Post.

“Several of them are members of the Post, and they just happen to live there,” he said.

“This gives them the chance to share stories with people who are not there all of the time. It’s kind of like seeing a family member you haven’t seen in a long time.”

Gatt said the meetings give Veterans Home residents an opportunity to share their experiences with someone dealing with similar things.

“Say you have a Vietnam Vet who saw some awful stuff in combat,” he said. “Often, they hold that inside and won’t talk to, say me, about it because I haven’t been to Vietnam. But when you are around people who have experienced the same things and been there, they get the chance to release those feelings with someone who was there, someone who understands.”

Gatt said there is a few Veterans Home residents suffering from post traumatic stress disorder, adding when the subject is approached, they can become standoffish.

“I try my best to pair them up with others that I know have been there and give them a chance to open up to each other,” Gatt said.

Along with reaching out to the region’s older Veterans, the American Legion Post 383 is also interested in recruiting new members.

“We’ve got the (Louisiana Army National Guard) in Reserve,” sergeant-at-arms Benny Robichaux said. “We reach out to them and let them know what their benefits are. We tell them about the Legion and how it protects their benefits coming from the military.

Robichaux said a lot of discharged veterans face medical problems that are expensive to address.

“Sometimes we have to get the (Veterans Affairs), kicking and screaming sometimes, to get them to approve certain conditions as time goes by,” Robichaux said. “Those are some of the things (younger Veterans) need to be aware of.”

Local youth are important to the Post, and Robichaux said members are educating them on the American flag and what it means.

“That way, they can have an emotional attachment with it,” Robichaux said. “In the military, and it should be in civilian life, the flag is treated like a living thing. It’s taken down at night, folded properly, put under guard and the next morning it’s raised in the proper manner and it’s revered.”

Gatt said Robichaux is always involved, especially when working with the youth.

“I have the highest regard for him and his wife,” Gatt said.

They are the first to volunteer, the first to arrive and the last to leave. We’ll lose a treasure when the Lord decides to call him.”

The parade will begin at Home Depot in LaPlace and travel down Airline Highway to the Southeast Louisiana War Veterans Home in Reserve.

Residents are invited to wave American flags and salute veterans in the procession of convertibles, jeeps, motorcycles and service-oriented vehicles as they travel along Airline Highway.

All are welcome to gather on the Veterans Home grounds for a small ceremony honoring veterans at approximately 10:30 a.m. following the parade, which will conclude with food and music.