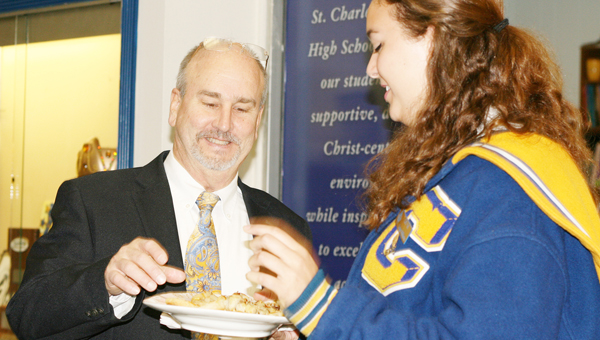 LAPLACE — Logan Williams has no problem cooking up different ways to get involved with her school and community, whether it’s singing in choir or teaching young children about Jesus.

The 17-year-old senior at St. Charles Catholic said one of her favorite organizations at school is the Stage Hands Drama Club.

“It’s a way to be someone other than yourself,” Williams said. “You get to break outside of your box and have a lot of fun. I started my freshman year. I was in the chorus of ‘Joseph and the Technicolor Dream Coat.’ My junior year, I was blessed to be able to have the lead role.”

Along with being the president of Stage Hands this year, Williams is also involved with student council and music ministry, along with other school activities.

She describes student council participants as students who want to take a more active role in school.

“Over the years we’ve made little changes,” Williams said. “Like this year with the block schedule, we’ve tried to help make it a smoother transition. We try to get together and better things, not just for our senior class but for classes after us.”

Williams said she works to make a difference through positions like homeroom representative and class president.

“I want to put my ideas out there and be a bigger part of the school,” she said. “I love this school and I love the people in it. As long as I’m being involved and doing something outside of myself, it makes me happy.”

SCC director of instruction and institutional advancement Courtney Millet said Williams is a great student and all-around person she has known for many years.

“She was in third grade at LaPlace Elementary during my last year as principal there,” Millet said. “I see all the things that she does. She is very involved, so I see her doing different things more than I hear about it. She is definitely an asset to our community.”

Williams is also involved with volunteer work at First Baptist Church of LaPlace, serving as a teacher for AWANA Sunday school.

“It’s a night Sunday school,” Williams said. “Kids go, whether they go to our church or not, and participate in fun things like games. We work with kids ages 3 to 4 all the way up to sixth grade. It’s a place where they can go and learn a little more about Jesus and His love.

“As the kids get older, they learn more things with Bible versus and what they mean, not just memorizing them.”

Williams is also involved with Vacation Bible School though her church.

All the service work earned Williams the Silver and Gold Service Awards during her time at SCC.

Williams’ biggest passion is pastries, and she hopes to attend Nicholls State University to earn a degree in pastry and culinary business operations.

“Nicholls is the only four-year college around with a culinary program,” Williams said. “There are other two-year culinary schools that focus solely on culinary. However, in New Orleans or just in Louisiana, in general, the focus is on ‘New Orleans’ pastries, which is not really what I wanted.

“For a while, I thought I just wanted to be a chef, but as I got older I realized it’s easier for me to make pastries. What I love about pastries is that they are so versatile.”

After tasting some of the treats she prepared Wednesday, assistant principal Doug Triche said he could eat the whole plate.