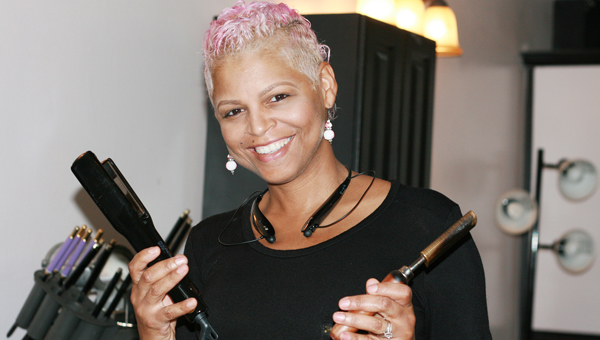 Sherrie Ashante, owner of Sherrialize Beautiful Creations Salon in LaPlace, shows off two of her favorite tools, a flat iron in her right hand and a pressing comb in her left hand. Ashante recently worked at New York Couture Fashion Week.

LAPLACE —Sherrie Ashante had to style her own hair when she was a little girl.

The work then turned into a passion today that pushed Ashante to operate her own LaPlace salon and style models’ hair at this year’s New York Couture Fashion Week.

“My mom wouldn’t let me get my hair done,” Ashante said. “She said, ‘you better get in there and do your own hair,’ and I realized I had to do it myself. That’s when I got started.”

Ashante has graduated from personal styling to business ownership and national showcases.

She recently completed work at New York Couture Fashion Week after her instructor Elie Esper invited a few of the stylists he liked to work with him at fashion week.

“It was my first time doing a fashion show,” she said. “It was very fast paced, and I really enjoyed it. That opportunity was great, and I look forward to going back.”

“When you’re doing the hair, you smile and say, ‘yeah, I did that,’” Ashante said. “But, when they put on the clothing and the make up is done and you see it on a big screen, it was breathtaking. I still look at pictures and get goosebumps.”

Ashante’s growth in the industry has come through hard work and training, as she has been a business owner in St. John the Baptist Parish for 10 years.

Her salon, “Sherrialize Beautiful Creations Salon,” is located at 2917 U.S. 51, Suite B in LaPlace.

St. John Economic Development Director Torri Buckles and Ashante have been friends for years. In fact, Ashante was Buckles’ hairstylist.

“She is extremely talented,” Buckles said. “She has such an attention to detail, it’s incredible. We are so fortunate to have someone with that level of talent in St. John. On a more personal level, Sherrie is fun. She is like your best girl friend. She is the type of person that if you are in her chair, probably within an hour she would know your entire story and vice versa.”

Buckles is champion of the parish’s FastTrac Program, which guides business owners and entrepreneurs who want to be successful operating a local small business.

Ashante graduated from FastTrac in May.

“It helps get people prepared for business,” Ashante said. It taught me a lot. It taught me how to make a business plan. I learned a lot about QuickBooks, and it teaches, overall, how to take care of a business. There are a lot of things when you start out that you think you know, but when I started the class I realized I didn’t know as much. I learned a lot of things that I implemented into my business now.”

Buckles said FastTrac started in 2013 and has graduated more than 50 people. Ashante encourages anyone thinking about owning a business to give it a try.

Along with running her own business and attending to clients, Ashante is continuing her education with online classes.

“I’m taking classes to help improve my skills for doing catwalks and editorial shoots,” she said. “I’m also in school so I can be able to teach. I want to be an instructor. I want to bring this skill into local high schools. I feel that when the kids graduate, they don’t have a trade. I would love to be able to implement beautician classes in the schools.”

Ashante said her salon is doing well and offers a range of styles from updos to extensions. Her favorite thing is using her old fashioned pressing comb.

“A pressing comb is a comb that is made of metal,” she said. “You put it in a stove and let it get hot. I love using that, along with the flat iron. The hair looks better to me, and it lasts longer.”