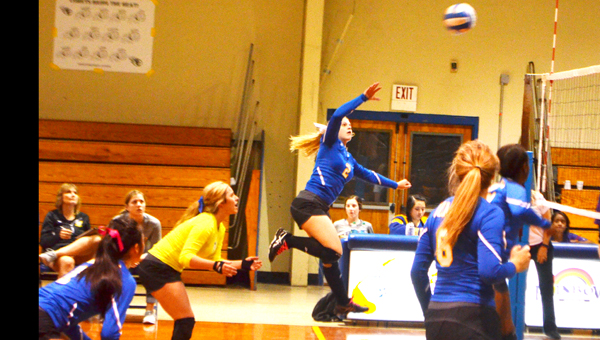 LAPLACE — The St. Charles Catholic Lady Comets (16-18) finished their last full week of seasonal games with a trip to Metairie and a victory against Haynes Academy (12-13) Thursday.

SCC lost the first of four matches, but pulled off wins in the last three to take the victory.

“We lost the first and won the next three. In the fourth game, we were down by 10 points. I’m so proud of my girls to push through and stay determined to come back and fight for a win.”

“For the tournament, we were missing a couple of our starters, so we had to rearrange some of our line ups,” Ericksen said.

“We started slow in our play but were able to step up our game enough to make it to the semifinal round of the tournament.”

That would be the Lady Comets’ last triumph of the tournament as they were defeated by Central Baton Rouge 2-0, 25-11 and 25-5 in the semis.

Grace Mohon had 28 kills, four aces, 19 digs, one block and two assists during the tournament.

St. Charles Catholic followed their tournament success with a victory over St. James Monday, defeating the Lady Wildcats 3-0 by scores of 25-17, 25-9 and 25-8.

The Lady Comets followed with a loss Tuesday to the Hahnville Lady Tigers, Hahnville winning 3-2 in a close match on the Comets’ court.

“Overall, we have been playing excellent lately,” Ericksen said.

“We were pretty evenly matched playing against Hahnville. We fought hard the entire time, but what really hurt us was some communication errors and simple fundamental mistakes.

“We did an excellent job at hitting and keeping our pace of the game going.”