Give each Alzheimer’s patient an elephant 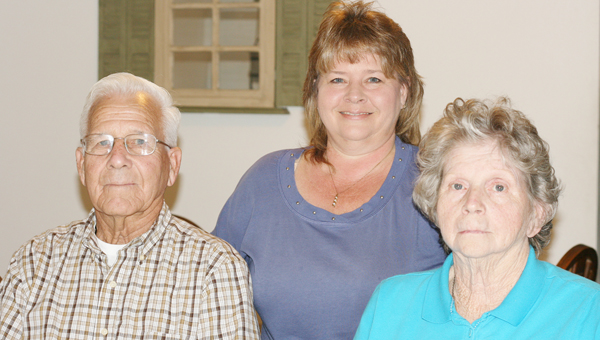 Michael Wise and Debbi Tamplain, center, take turns caring for Barbara Wise, right, who was diagnosed with Alzheimer’s in December 2011.

LAPLACE — A local woman is trying to raise money and awareness for Alzheimer’s in St. John the Baptist Parish with elephants.

Debbi Tamplain shows off an Eduardo the Elephant flyer, announcing a fundraiser to battle Alzheimer’s.

“An elephant never forgets, but people with Alzheimer’s do,” Debbi Tamplain said.

In December 2011 Tamplain’s mother, Barbara Wise, was diagnosed with Alzheimer’s. Tamplain and her father Michael Wise are Barbara’s caregivers.

“Just recently we have experienced where my mom does not recognize my dad on a few occasions,” Tamplain said. “November is National Alzheimer’s Awareness Month. We need to find a cure to help our generation, as well as our future generations.”

Tamplain, an AVON representative, first saw the stuffed elephant, Eduardo, in a fundraiser flyer put out by AVON.

“When I saw the flyer come across, I thought, ‘what could you do with an elephant?’” Tamplain said. “Then it triggered an elephant never forgets but Alzheimer’s people do. So I thought what a good tie in, to try and raise money. Then I thought about the local nursing homes with Alzheimer’s patients and I wondered if they would like the stuffed animals.”

Tamplain called Twin Oaks, the Southeast LA War Veterans Home and Ormond Nursing Home and asked if the Alzheimer’s patients would like the elephants.

“My plan is to donate the elephants to the patients and then $8 from every elephant would go to the Walk to End Alzheimer’s. Everyone I spoke with at the nursing homes said the patients would love the stuffed animals.”

Her goal is to have every patient in the nursing homes that have Alzheimer’s receive a elephant.

The Walk to End Alzheimer’s is Nov. 14 in Metairie at LaSalle Park.

“There are different types,” Tamplain said. “From what I’ve read, it can start with effecting your memory, you could forget who someone is or how to do different things. There are also ones where the person may get angry. Eventually, they can lose the ability to walk or swallow in the later stages. It just depends, no two cases are the same.”

Tamplain spends about four to six hours everyday with her mother to give her father, who is the primary caregiver, a break.

“There are good days and bad,” she said. “To me, it’s family, so you step up and help out.

“It’s doing activities like cooking and labeling books, repetitive things. Whatever I’m working on, I try and have her assist me. To me, I feel like it makes a difference.”

As of Wednesday Tamplain had sold four elephants.

“The one in Ormond has 65 people with Alzheimer’s and the Veteran’s home has 38,” Tamplain said. “I have to verify how many are at Twin Oaks. That’s almost 100; I would like to sell 150 to 200 so everyone gets one. I can’t give some Alzheimer’s patients an elephant and not give some to the rest. If I have to, I’ll buy some myself to make sure everyone has an elephant.”

Tamplain hopes people, maybe even businesses, will buy the elephants.

“It’s a good cause,” she said. “It’s going to put a smile on an Alzheimer’s patient’s face, and we are going to raise money to end this disease. There is no cure. I think the number of people diagnosed with Alzheimer’s is supposed to triple in 2050. As of 2014, 5.2 million Americans were diagnosed with it. The scary thing is that it can effect someone in their 30s, 40s and 50s. It’s not just an elderly person’s disease.”

Tamplain’s father said he was proud of his daughter for doing the fundraiser.

“It feels wondering knowing she is doing it,” he said with a smile. “It’s helping people and doing good work.”

The elephants cost $22.60 plus tax. Those interested can purchase the elephants through December by contacting Tamplain at 504-415-8511.