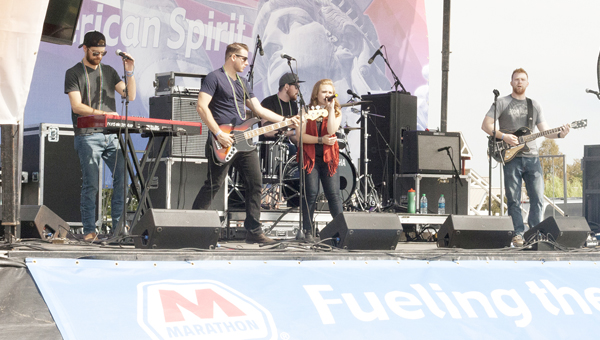 Kayla Woodson and her band perform for the Andouille Festival crowd in 2015.

LAPLACE — Dominick Davis has been attending the St. John the Baptist Parish Andouille Festival for years, and Saturday happened to be the day she introduced her daughter to the fun.

Jayden Jackson, 6, from left, Dominick Davis and Lyric Williams, along with 1-year-old Payton Brown were all smiles at Saturday’s Andouille Festival.

“I think she enjoys the food more than anything,” Davis said, smiling down at her daughter Saturday afternoon. Payton spent much of the afternoon clapping her hands along with the music and smiling as her mother fed her pieces of funnel cake.

“I like bringing my sister and my son, and this is my daughter’s first year coming,” Davis said.

Davis keeps coming back every year so the children can ride the rides and have fun even though she admitted to being a little afraid of the rides.

Saturday did mark a first for Davis — this weekend was the first time she sat down and listened to the music.

Davis listened to Kayla Woodson, adding she had never heard Woodson’s work before but really enjoyed it.

Being a local, Davis feels a festival like this is good for the community.

“I think it’s important to support local businesses,” she said. “You find out where they are located and go back and support them.”

“We had approximately 20,300 people this year,” Falgoust said. “Our biggest increase was on Sunday. We had 3,000 additional people from last year. We also sold 23,000 more ride bracelets this year, as opposed to last year.

Falgoust said attendees came for the food, bands and more.

“Our kid zone also brings a large number of people,” she said. “You have the kids performing and the parents, family and friends who come and watch.”

As of Tuesday morning’s press deadline, parish officials were tallying how much money was raised this year and hope to have a final figure in a few weeks. In 2014, the Festival brought it $122,000.

“Funds generated from the festival go to putting the Andouille Festival on for the next year,” Falgoust said. “This year, a portion of the gate money was split with the Lions Club, and a portion of drink sales will go to the schools.”

Brien Michael Kraemur attended the festival for the first time Saturday, arriving at 9 a.m. even though festivities didn’t start until 11 a.m.

Kraemur of Lafourche Parish said the music was good.

“I’m always having fun, and festivals are fun,” he said. “People get along with each other and have a fun time. I work with some people, who work at the chemical plants, and they’ve told me about the festival and how fun it is and all the good food they serve. So, I thought I would come out and see.”

Kraemur was seen tapping his foot Saturday along to the live music performed for the crowd.

“I love music,” he said. “Country, rock, I love it all. I don’t know any of the bands playing, but I enjoyed them.”

Beth Broussard said she has been coming to the Andouille Festival since she was a little girl.

“I live in New Orleans and don’t mind the drive every year,” she said. “There seems to be at least one (festival) every weekend. The Andouille Fest is one of my favorites. I love the food, the people and the music. My kids love coming for the rides and games. I love being able to introduce my kids to the foods that they wouldn’t get to eat at any restaurant, and I love the culture of LaPlace. The people here are so kind and welcoming. I’ll be back next year and I’m sure every year after that.”

First time attendee Bryon Richard of Wisconsin got into town Thursday was one of many people who passed through the gates.

“My girlfriend lives in LaPlace,” he said. “She thought it would be fun to come this weekend, and I’m glad I did. You Louisiana people know how to have a good time. The food is out of this world, and the festival coordinators chose some pretty good bands.”