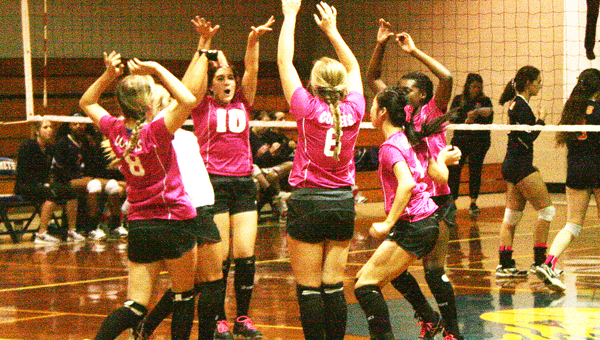 LAPLACE — It wasn’t the best week of volleyball for the St. Charles Catholic Lady Comets (13-14.)

“We were mentally and physically drained,” SCC volleyball coach Meghan Ericksen said. “It’s the end of exams, and the girls were completely drained going into the game. They were mentally exhausted before the game even started. That was the biggest problem. We weren’t communicating and doing everything that we are used to doing.”

While the disappointment of the coach and team was evident, Ericksen said the Lady Comets didn’t play all bad.

“We continued to attack the ball,” Ericksen said. “We really tried to limit the amount of free balls that we gave them. No matter what, we always returned the attack.”

Grace Mohon finished the match with four kills, and Alyssa Arceneaux had 34 digs and one kill.

Unfortunately for SCC, Thursday’s loss was the team’s fourth loss in the last five matches.

St. Charles Catholic traveled to Lutcher Oct. 10 to compete in three matches during the Lutcher tournament.

SCC’s Lela Hill had four kills and made one block, and Alyssa Arceneaux had 12 digs.

The Lady Comets were defeated in the tournament’s second match by the South Terrebonne Lady Gators (21-7.) The Lady Gators’ 2-0 victory was close for SCC with scores of 25-18 and 25-17.

Lela Hill connected on four kills and one block, and Grace Mohon had three kills and four digs.

“We started off slow at the Lutcher tournament,” Ericksen said. “We didn’t want to leave the tournament 0-3, so we definitely brought it for the third game. We played the first two games back-to-back, but we had a break before the third match. That break really helped us focus and get ourselves motivated for the game.”

Lela Hill closed with four kills and one ace; Grace Mohon had seven kills, eight digs and one block; Maddie Murphy and Robbie Duhe each had three kills.

The Lady Comets trekked to Reserve Tuesday to play against their rivals, Riverside Academy (16-8.)

Even with too many serving errors, the Lady Comets showed they were still equal opponents.

As of press time Friday morning, the Lady Comets trekked to Jefferson to compete in the St. Thomas Aquinas Tournament alongside fellow parish competitors East St. John and Riverside.