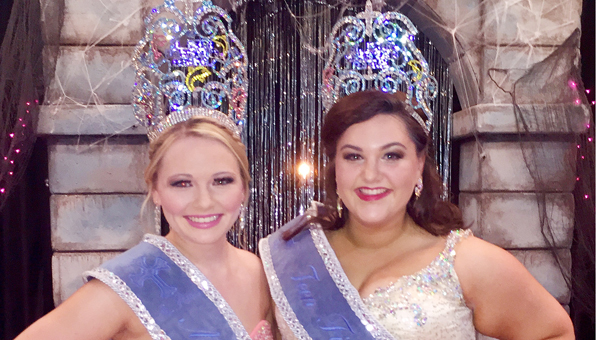 RESERVE — As part of a fundraiser for the school, St. Peter Catholic School in Reserve held its third annual Fishermen’s Festival Pageants Saturday and Sunday.

Winners of the Baby Pageants take the stage during the third annual Fishermen’s Festival Pageants.

The Queen of the Deb Miss division winner was Madison Cain, the 11-year-old daughter of Michael and Tara of Geismar.

Jr. Queen was Jade Clement, the 13-year-old daughter of Rebecca Genovese and Randell Clement of LaPlace.

Teen Queen went to Carley Hoover, the 16-year-old daughter of Jeremy and Candace of LaPlace. Hoover also won the Costume award for the opening number from the Teen division.

The Queen of the Ms. division was Dana Breud of LaPlace.

According to co-director Katie Baedle, the number of contestants seemed consistent with previous years.

The other co-director for the pageant was Aimee Perret.

What the co-directors weren’t expecting was the crowd of people that attended.

“We had to put out more chairs,” Baedle said. “We had a good showing for our visiting queens.”

According to Baedle, the outgoing queens had a special day the same day as the pageant, where they enjoyed a scavenger hunt and a pumpkin-decorating contest. All of the visiting queens came dressed in special attire.

“The vising queens were dressed in costume for our opening number,” Baedle said. “Our theme was Fright Night and they had fun with it. They dressed up in costumes and had a really good time.

“One thing that was priceless was the face of the Miss Queen. It was a nice moment, she was completely shocked.”

In the Baby Miss division, the Queen was Madeline Mize Amiee Richard of Covington; first runner up was Ainsely Becnel, daughter of Missy and Scott of Reserve and the second runner up was Riley Gelatte, daughter of Amanda and Jason of LaPlace.

The Tiny Tot Miss winner was Paislee Bailey, daughter of Justin and Amanda of Gramercy.

The Toddle Miss winner was Sophia Munoz, daughter of Gerald and Christen of LaPlace.

Lillie Vicknair, daughter of Rhett and Heather of Prairieville, was the Precious Miss winner.

Tiny Miss winner was Kelsey Jo-Hoover, daughter of Jeremy and Candace of LaPlace.

For the Little Miss division, the Queen was Mackenize Ory, daughter of Chad and Christina of Gramercy, and the first runner up was Caleigh Remondet, daughter of CJ and Carla of Reserve.