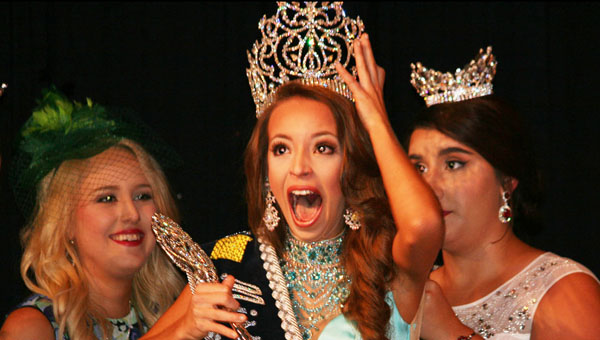 “Being queen is something I’ve always wanted, so this is like a dream come true honestly,” King said. “They have so many new things this year. I’m really looking forward to going to D.C. I’ve been once, but it wasn’t a long enough trip.”

King was crowned Saturday night at St. John Theatre in Reserve during the 2015 Miss and Teen Andouille Queen Pageant, which included 12 girls competing for various crowns and recognitions.

King said many contestants were nervous about the on-stage interview questions, but when it was her turn at the microphone, things calmed down.

While preparing for the pageant and learning the history of the Andouille Festival, King found out her grandfather was one of the festival’s first organizers. Despite all the preparation, she was still shocked to hear her named called.

King did have a little bit of tradition on her side. In 2009, she was named Teen Andouille Queen.

Those competing in the Miss division, which was for ladies ages 17-23, included King, Kassidy Duhe, Brittany Lambert and Janet Nelson.

The Miss division’s People Choice award went to Nelson, the 18-year-old daughter of Stephen and Staci Nelson of LaPlace. Nelson was awarded the Interview Fashion award and was also First Runner Up.

The Photogenic award was given to Lambert. The 19-year-old daughter of Douglas and Penny Lambert of Reserve was also Second Runner up.

Third Runner Up was Duhe, 17, daughter of Brandon and Bridget Duhe of Reserve.

King, along with winning the crown, was awarded the Evening Gown Fashion award and Miss Congeniality. King, 19, is the daughter of Jason and Valarie King of LaPlace. She is a sophomore at LSU studying mass communication.

Tabitha Tregre was crowned Teen Andouille Queen during Saturday night’s festivities. The 14-year-old daughter of Kirt and Tricia Tregre of Reserve was sponsored by Katie Lyn Salon, owned and operated by her mother.

The People’s Choice award went to Alyssa Mulkey, who also took home the Evening Gown Fashion award, Miss Congeniality and 1st Runner Up. The Photogenic award went to Jones, who was 3rd Runner Up.

The Interview Fashion award was awarded to St. Pierre. The Second Runner Up in the Teen division was Porche.

In addition to competing for the Louisiana Association of Fairs and Festivals Queen of Queen title, the St. John Miss Andouille Queen will travel to Washington, D.C. in February. The queen will attend the Washington Mardi Gras Ball as well as tour historical sites, such as Arlington National Cemetery, the United States Capital, the White House, the Lincoln Memorial and the Washington Monument.

During the competition, the question asked to the Miss contestants was which of their five senses they would give up and why. King said she would give up smell.

“I already struggle with allergies for most of the year,” King said. “I live in Louisiana and I need taste. I go to college on weekdays and I really appreciate seeing my family when I come home, hearing their voices and hugging my family. So out of those senses, I don’t think I would mind losing smell.”

To go with the theme of the night, Run for the Roses, the 12 contestants wore derby hats and outfits that “matched their personalities.”

After the Miss contestants finished the on-stage interview question, more than 40 visiting queens came on stage to tell the audience where they were from and which parish or festival they represented.

The audience also enjoyed performances from Aimee’s Dance Academy and the St. Charles Miss Queen of Hearts and her Teen Queen.

The newly crowned queens will get to enjoy their recognitions this month at the St. John the Baptist Parish Andouille Festival, which takes place Oct. 16-18 at the Thomas F. Daley Memorial Park and St. John Community Center on U.S. 51.