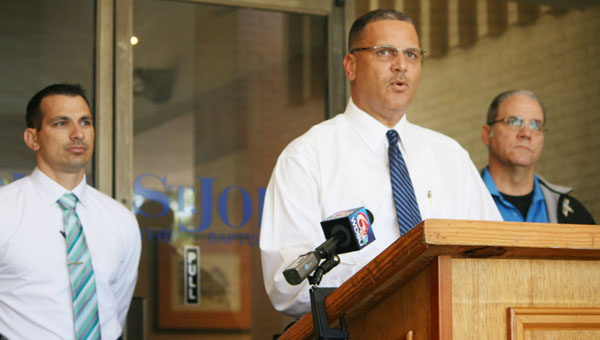 LAPLACE — Three people who arrived at a LaPlace home in the 400 block of State Street at approximately 1:50 a.m. Monday were gunned down, two dying following the gun violence.

St. John the Baptist Parish Sheriff’s Office detectives are seeking the assistance of the public in identifying a vehicle of interest following the killing of a LaPlace man this morning.

Tregre spoke in some detail about the shootings during a 12:30 p.m. Monday press conference in front of Sheriff’s Office headquarters in LaPlace.

“We have some suspicion and some street talk and some rumors, but we will take that,” Tregre said. “It’s better than no calls at all.”

Authorities are asking residents to call in with any available information.

“We have reason to believe that the victims had just arrived in a vehicle of their own and were exiting the vehicle, and that’s when this white pick up truck drove up and opened fired,” Tregre said.

Deputies responded at 1:52 a.m. Monday to the 400 block of State Street following the shooting report.

Responding deputies located two shooting victims at the residence, and a third victim was driven to the emergency room at Ochsner in LaPlace.

One of the shooting victims — Travis Gregoire of LaPlace — died early Monday.

A 23-year-old male victim was taken to a New Orleans-area hospital.

Authorities would not comment on the relationship of the victims, but did say they have identified a vehicle believed to be involved in the shooting.

Detectives have begun canvasing the area.

“Our crime cameras have actually assisted us greatly,” Tregre said. “We have captured an image of a vehicle identified as a white four-door extended cab pick-up truck. Investigators have reason to believe it may have been used as the vehicle to commit this homicide.”

A video of the truck has been circulated, and authorities said within an hour of its posting, calls began coming in.

Tregre said detectives have not clearly established a motive for the shooting.

Anyone with information regarding the shooting is asked to call the Sheriff’s Office TIPS line at 985-359-TIPS or Crimestoppers at 504-822-1111. Those that call Crimestoppers do not have to testify and may qualify for a cash reward.