Saying goodbye to the crowns 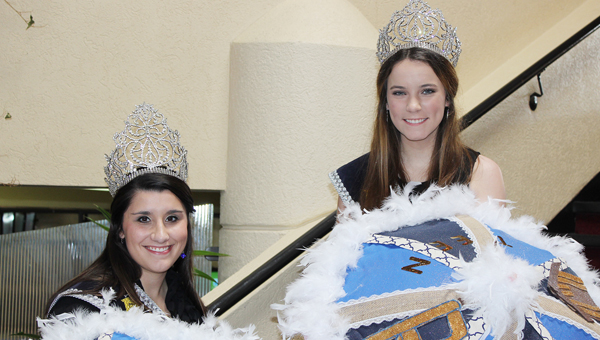 The reigns of Erin Duhe and Riley Edwards are coming to an end. The Miss and Teen Andouille Queens will pass down their crowns tonight to their successors.

Erin Duhe and Riley Edwards attended the St. James Bonfire Festival Queens Day Program and
the Bonfire Pageant, where they made a sled to slide down the levee. It only worked when Erin pushed Riley down the levee.

Duhe, 24-year-old daughter of Faron and Donna Delbasty Duhe, entered the pageant for the first time in 2014 and won the Miss Andouille Queen title.

“I had done three very small pageants before this one, however, the Andouille Pageant was my first big festival pageant with interview, introduction, dance number and on-stage question,” Duhe said. “Growing up in St. John, I have always known about the Andouille Pageant and admired the girls who wore the crown, but it was only last year when one of my best friends won the title of Miss Andouille 2013 and shared her experience that I was interested in competing.”

The first timer said she was shocked when she found out she won.

“I thought for sure I would come out last,” Duhe said. “All that was left to award was 1st runner up and the title of Miss Andouille. When my name was still not said for the 1st runner up, I think I just stood there in shock. It wasn’t until I woke up the next morning with my crown and banner staring back at me from my shelf that I fully grasped the concept of having won this amazing title.”

The title of queen comes with great responsibility.

“The duties of a pageant queen are to represent her title and community to the best of her ability with pride and grace and travel around our great state of Louisiana to promote the community and festival,” Duhe said. “Not only was I able to travel and promote St. John Parish and the Andouille Festival, I also learned a lot about other festivals and what their parishes had to offer.”

Duhe travled to Colfax for the Pecan Festival, Fort Jackson for Plaquemines Parish Orange Festival, the Shrimp and Petroleum Festival in Morgan City and the Strawberry Festival in Ponchatoula just to name a few.

Duhe also participated in the Queen of Queens Pageant in February and the LA Mardi Gras Pageant with Edwards.

Since she has already won the title and no longer is in the age group, Duhe can no longer compete in the pageant. Even though she can’t compete, it doesn’t mean she didn’t help out.

A week before this year’s pageant, Duhe and Edwards met with the contestants. The queens let the contestants know what they had been up to and told them what they would have to do if they won the title. The young ladies also taught the 2015 contestants how to walk and worked with them on the dance.

Edwards, 16-year-old daughter of Rick and Kelly Edwards, said it will feel bittersweet passing down the crown.

“I enjoyed my reign so much and would keep my title if I could, but I’m excited to see what the new queen does throughout her reign,” Edwards said.

Also like Duhe, last year was Edward’s fist time competing in the pageant.

“When I was announced Teen Andouille, I was shocked but also filled with joy to see what the year had in store for me,” Edwards said.

“Ever since I was little, I would attend the Andouille Pageant and watch the crown be passed down from queen to queen, and it was also a dream of mine for the crown to be passed on to me.”

Both girls wish the new queens luck with their reign as the 2015 Miss and Teen Andouille Queens.

Duhe graduated from Southeastern Louisiana University in 2014 with a Bachelor of Arts in Psychology.

She works at Lake Pontchartrain Elementary School as a special education teacher.

Edwards is a junior at St. Charles Catholic High School.