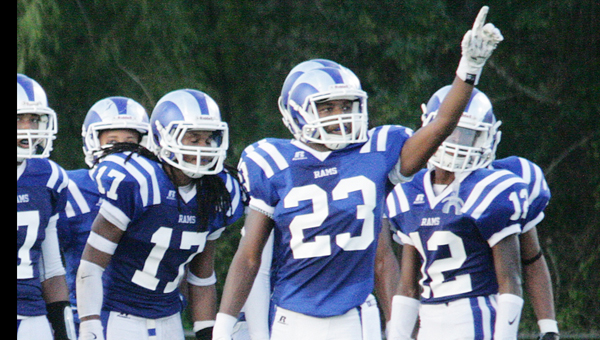 Glenn Grayman, No. 23, and the rest of the West St. John Rams are looking to bounce back this week when they battle Woodlawn High.

EDGARD — The West St. John Rams (2-2) are looking to bounce back after suffering two losses in as many weeks.

WSJ was defeated 35-22 by Kentwood Friday on the Kangaroos’ home turf.

“We scored first in the first quarter,” WSJ football coach Brandon Walters said, “but they came back and scored twice.

“We didn’t execute well last week. We missed a lot of tackles; we made a lot of mistakes.”

Walters said the last two losses weren’t going to hold his players back.

The Rams are ready to fight back against the Baton Rouge Woodlawn Panthers (1-3) Walters said.

“We may have lost twice in a row after winning our first two games we are not going to bow our heads and tuck our tails between our legs.” Walters said. “We don’t want to go down with another loss. These last two weeks were an eye opener. We have to right the ship.”

Walters said the Rams will run their same plays, but need to make adjustments before facing Woodlawn this week.

“We need to get the kids to lock-in mentally and execute on offense and defense,” Walters said. “Woodlawn is a good team. They have a fast running back and a pretty good quarterback. (Cornerback) Shawn White plays really well and he is someone we have to watch out for.

“We’ve identified the people who can really play. (Woodlawn) has some deep players. Playing and beating a team like this will prepare us for later games in district and the playoffs.”

Walters said that the Panthers are going to be a tough team to beat, but that isn’t going to stop them from trying.

The Rams will take on the Panthers at 7 p.m. Friday at Woodlawn high school.