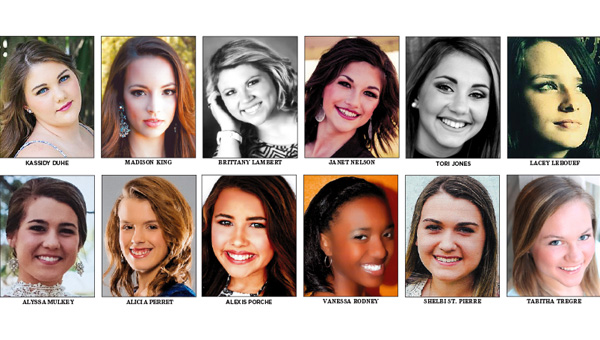 A group of 12 young ladies are competing to take home the title of Miss or Teen Andouille Queen.

RESERVE — A group of 12 young ladies are competing to take home the title of Miss or Teen Andouille Queen.

“These numbers are pretty good and comparable to other pageants in the Tri-parish area,” pageant director Dana Milioto said. “In 2014, we had three Miss and four Teen contestants.”

The Andouille Pageant will be held at 7 p.m. Saturday at St. John Theatre, 115 W. 4th St. in Reserve. The theme is “Run for the Roses,” a classy tribute to the Kentucky Derby.

“All these girls competing for the title are under 20 years old,” Milioto said.

“It’s a young group. That’s promising. It shows that maybe the pageant industry is picking up speed again. It’s been in a lull for a few years now.”

The competition will consist of an interview and on stage promenade. As part of the Miss division, the four contestants will answer on-stage questions and compete in an evening gown portion.

“I believe the onstage question in the Miss division deters some ladies from entering,” Milioto said. “However, the two possible questions are given to the contestants in advance for proper preparation. The only unknown is which one will be chosen on stage the night of the pageant.

“It’s important to show confidence when speaking in front of a crowd, as this chosen ambassador of this festival will be representing the parish and speaking on our behalf around the state during her reign.”

The committee for the pageant is comprised of volunteers who are residents of St. John the Baptist Parish as well as former Andouille Queens.

The musical dance entertainment will be performed by the St. Charles Parish Miss Queen of Hearts, Aimee’s Dance Academy’s Competition Team and the 2014 Andouille Queens and contestants.

“I would like to wish all of our Teen and Miss contestants the best of luck in the 2015 Andouille Pageant,” current Queen Erin Duhe said, adding it is bittersweet knowing she is passing off her crown.

For the Miss division, there are four ladies vying for Duhe’s crown.

Kassidy Duhe is the 17-year-old daughter of Brandon and Bridget Duhe of Reserve and will be sponsored by Lennix Madere, St. John Councilman for District 3.

Brittany Lambert is the 19-year-old daughter of Douglas and Penny Lambert of Reserve. She will be sponsored by All Star Electric.

Madison King is the 19-year-old daughter of Jason and Valarie King of LaPlace. She is being sponsored by Cutting Edge Lawn Service.

Janet Nelson is the 18-year-old daughter of Stephen and Staci Nelson of LaPlace and is being sponsored by Steven Fraker, candidate for Parish Council District 7.

Riley Edwards is the 2014 Teen Queen. There eight young ladies hoping to take her crown.

Tori Jones, the 15-year-old daughter of Helen and Randy Clement of LaPlace, is being sponsored by Michael Hoover, candidate for Sheriff.

Lacey LeBouef, 15, is the daughter of Angelle and Lance LeBouef of Reserve. She is sponsored by Gino & Gina’s Hair Salon.

Alyssa Mulkey, 16-year-old daughter of Shane Mulkey and Echo Alonzo of LaPlace will be sponsored by Viynltech, owned by her father Shane Mulkey.

Alicia Perret, 15, is the daughter of Jonathan and Aimee Perret of Edgard. St. John Parish Sheriff Mike Tregre sponsors her.

Alexis Porche, the 16-year-old daughter of Thomas Porche III and Lili Castillo of LaPlace, is being sponsored by Rollo Security Services Inc.

Vanessa Rodney is being sponsored by Lucien Gauff, candidate for Assessor. She is 15 years old and the daughter of Meionka Brown and Vanderbilt Rodney Davis of LaPlace.

Shelbi St. Pierre is being sponsored by Cheryl Millet, candidate for Parish Council-at-Large Division B. She is 16 years old and the daughter of Dale and Susan St. Pierre of LaPlace.

Tabitha Tregre, the 14-year-old daughter of Kirt and Tricia Tregre of Reserve, is being sponsored by Katie Lyn Salon, owned and operated by her mother Tricia Tregre.

In addition to competing for the Louisiana Association of Fairs and Festivals Queen of Queen title, the St. John Miss Andouille Queen will travel to Washington, D.C. in February. The queen will attend the Washington Mardi Gras Ball as well as tour historical sites, such as Arlington National Cemetery, the United States Capital, the White House, the Lincoln Memorial and the Washington Monument.

Tickets are on sale from 8 a.m. to 4:30 p.m. through Friday at the parish administration building in LaPlace.

Tickets, which cost $10, can also be purchased between 6 and 8 p.m. today and Thursday at St. John Theatre in Reserve.

The theater and box office open at 6 p.m. Saturday, the day of the show. Pageant production begins at  7 p.m.