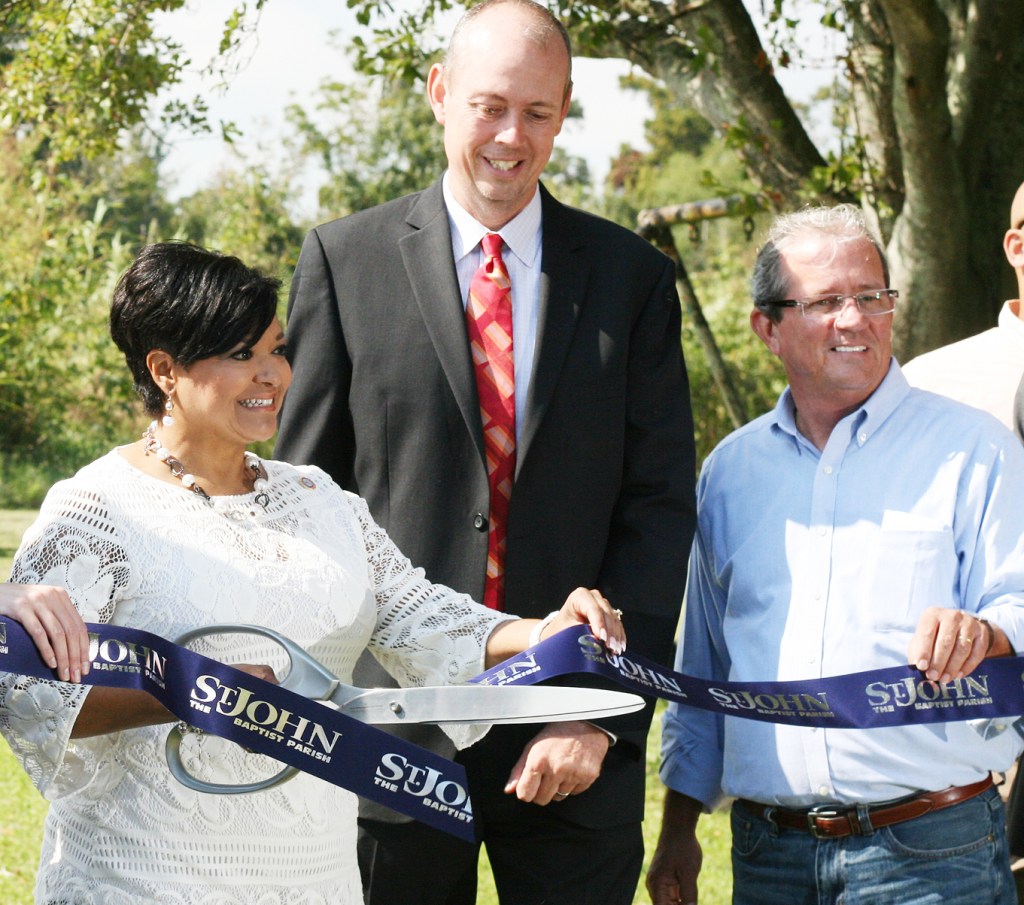 LAPLACE — A 20-foot storm surge and weather sensor has been installed at Frenier Landing in LaPlace.

“At base level, it’s three feet,” said Kenneth Graham of the National Weather Service. “We raise it to about 17 feet, but the sensors themselves are around 18 to 19 feet and the tip is around 20 feet.”

State and parish officials gather Wednesday with local supporters to celebrate the unveiling of a 20-foot storm surge and weather sensor in LaPlace. (By Raquel Derganz Baker/L’Observateur)

The real time sensors will have continuous monitoring of water levels, including those produced by storm surge in the lake.

“This equipment is so special because it’s going to be above storm surge level,” Graham said. “We should be able to get through a category one, two and three storm and still have data.”

The new storm surge and weather sensor is located on the edge of Lake Pontchartrain in the backyard of Wayne Guidry.

“They asked me if they could put this thing in my backyard, and I said ‘yes,’” Guidry said.

“I have no problem with it being there. I like to see it out there.”

Guidry, who has lived in the area for 34 years, hopes the new weather station helps the community deal with future storms.

“I’m all for the weather sensor,” Guidry said. “I get as much out of it as the parish. This is the only weather station, that I know of, on this side of the lake.”

Both sensors are designed to survive storms with the water level sensor rated to withstand 110 mph wind. This particular location is the only site in the country with this configuration, officials said.

“Hurricane Isaac exposed St. John’s vulnerability to flooding from Lake Pontchartrain, accentuating the need for real time data to properly plan and prepare for flooding events,” Robottom said. “The lack of information and storm surge monitoring on the northwest side of the lake resulted in little advance warning of the pending flooding.”

The location in St. John was selected because of a “data void.”

“This was a critical place for us to collect data,” Graham said. “When water from a hurricane is pushed through Lake Pontchartrain, this is where it piles up. It piles up here, then goes into Lake Maurepas and all that impacts LaPlace. So, this is a place where we want to see the behavior of the water.”

The sensors in the weather station take the data collected and send it to a satellite, so no phone lines are involved.

The parish did not pay for the new weather station; it was funded internally within the National Weather Service. According to Graham, funding came through a partnership with National Ocean Service and other parts of NOAA.

“We all pitched in to make it happen because we knew it was that important,” Graham said. “From the planning phase to the installation, it took us about a year to complete. There is a lot that goes into this to make it right.”