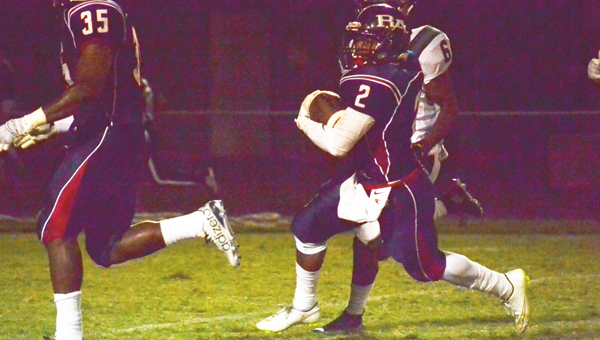 RESERVE — It took a goal line stand, stopping the Plaquemine Green Devils from the one-yard-line (1-3) twice in a row for the Riverside Rebels (3-1) to hold onto the lead and ultimately win in their second home game of the season.

The Rebels were leading 17-14 at the end of the third quarter when a Green Devils linebacker made an interception at midfield and ran the ball all the way down to the Rebels five-yard line. After two runs and a defensive offsides, the Rebels defense dug in their heels and pushed back against a mass of Green Devils bodies to hold their ground.

It was all Rebels tailback Brandon Sanders from there on out.

Riverside linebacker Evan Veron had a sack and numerous tackles.

Two plays later Sanders took a handoff up the middle for a 59-yard gain. Sanders also capped off the five-play, 99-yard drive with a 20-yard rushing touchdown to turn the tide and put the Rebels up 24-14.

Sanders added another score after a Plaquemine punt on a 17-yard rushing touchdown with less than four minutes left for the last score of the game, which put the Rebels ahead 31-14.

“Sometimes you’ve just got to do what you’ve got to do,” Riverside head coach Bill Stubbs said. “You’ve got to give it to the money guys, and there it is.”

Stubbs said he was proud of the way his defense in particular played to seal the game on the goal line stand.

“It is a credit to the way we play defense,” Stubbs said. “Those guys are real, real proud of what they are doing and they had some really great individual efforts out there (Friday).”

The Rebels offense was able to move the ball much of the night and came out to a 17-0 lead early off of a 32-yard field goal by Tyler Gather in the first quarter. Riverside added to their lead with a 20-yard touchdown reception by Jared Butler and an 18-yard quarterback keeper by Herb McGee in the second quarter.

But a muffed punt by Riverside gave Plaquemine some room, and the Green Devils scored off a 26-yard halfback pass with 31 second to go in the half.

Plaquemine peeled off a 54-yard rushing touchdown to start the second half only moments after snagging their first interception of the game, but that is all the Rebels would give up for the night.

Stubbs said without all of the mistakes on behalf of the Rebels, the game may have played out differently.

“It was a strange game,” Stubbs said. “To be honest with you, I think we did so many things to kind of kill ourselves with drives and holding penalties and other things, a fumble on a punt. We had a chance to put this thing away and then we didn’t. And look, that is not a bad football team, they are pretty doggone good.”