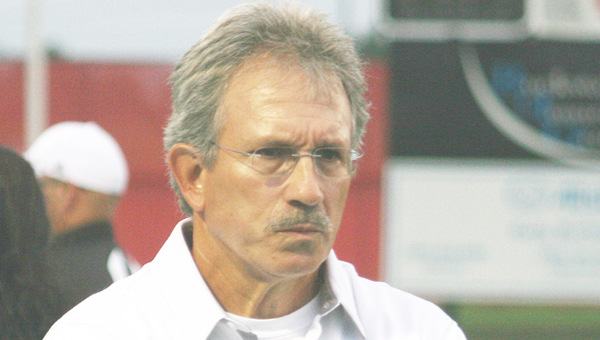 HAHNVILLE — The Riverside Academy Rebels (2-1) traveled to Tiger Stadium in Boutte to take on Hahnville Tigers (2-1) in one of the state’s most exciting match-ups Friday night.

The Rebels relied on a stiff defense to stifle Hahnville’s aggressive run game in a close 10-7 win.

“It was good ballgame — hard fought on both sides,” Riverside Academy head coach Bill Stubbs said. “The way we won, it was pretty much how we did (against Parkview Baptist,) where our kids protected the lead and we were able to hold on to it until the end of the game. That shows they are a pretty good group of kids.”

The low-scoring game saw the Rebels drive from their own 10-yard-line to get out to a 3-0 lead in the first quarter off a Tyler Gauthier field goal from 23 yards out.

Riverside added to the score in the second quarter with another long drive, 90 yards, this time ending in a touchdown off a 15-yard run by quarterback Herb McGee.

It was all defense from there on out.

In the third quarter, Hahnville drove the ball deep into Riverside territory, but the Rebels defense forced and recovered a fumble.

The Rebels came back with their own drive, bringing the ball down to the Hahnville 23-yard-line but were stopped on fourth-down-and-two.

With 4:19 left in the game, Hahnville finally scored on a 15-yard touchdown pass, but the Rebels were able to run the clock out on the next possession to win the game.

Stubbs said he felt his defense has improved since the season opener.

“They are playing lights out,” Stubbs said. “The last three weeks, they are just getting better and better. The sky might be the limit for those guys. They understand the scheme and they play it with passion. They love doing what they do, and it certainly shows on Friday nights.”

LAPLACE — The St. Charles Catholic Comets stayed perfect in their home opener in a lopsided victory over the Vandebilt Catholic Terriers. The Comets entered the game having scored 67 points, while holding their opponents winless.

This game differed only in the fact the Comets junior varsity defense gave up the team’s first touchdown of the year with a few minutes left in the game to bring the final score to 41-7.

That puts the Comets at a combined point differential of 101 to 7 through the first three games of the season.

St. Charles Catholic head coach Frank Monica said he was not upset by his third team defense giving up the Comets only touchdown of the year.

“We were happy with the outcome and we got a chance to play a couple of kids and that helps your program out even though some of those kids played Wednesday in JV too,” Monica said. “Vandebilt, they kept playing until the very end. They worked real hard to get the score, and I credit them for doing that.”

The Comets were also near perfection on offense. The Comets’ first score came off a 1-yard quarterback keeper by Patrick Ratliff. After a Vandebilt punt, the Comets came right back down the field, Justin Loupe breaking off on a 46-yard run, followed by an 11-yard rushing touchdown by Tahj Smith.

While most well known for their aggressive rushing game, the Comets went into passing mode, and wide receiver Brady Becker caught back-to-back touchdown passes to bring the score to 28-0 at the half. Becker also recovered a fumble on a kickoff that led to one of those scores.

The Rams (2-1) started off ahead early in the game following a long touchdown pass from quarterback Jemoine Green to wide receiver Jabari Walters.

But the Kittens (2-1), the No. 1 ranked team in Class 1A, struck back with their own touchdown pass and, after missing the extra point, trailed 7-6.  Walters said the Rams controlled the ball for much of the remainder of the first half but were unable to score.

“We were in the red zone pretty much the entire first half and couldn’t score — inside the 20 and inside the 10 and didn’t make the plays when it was time to,” Walters said.

Walters said execution was a big problem for the Rams.

“We kept them on their half of the field pretty much the entire first half,” Walters said. “They couldn’t move the ball on us or anything, but when we got the ball down there in the red zone, we just didn’t score.”

Walters said part of West St. John’s problem was with the running game.

“Our rushing game was not where we wanted it to be,” Walters said.

“We just kept stalling and didn’t make the big plays we needed. We just didn’t execute well. We have some work to do up front on that offensive line.”

Overall, Walters said the Rams did not do what was needed to win.

“There weren’t turnovers,” Walters said. “We just didn’t execute when it was time to.”

RESERVE — The East St. John Wildcats entered their home opener in week 3 winless and left the same way after losing to the Madison Prep Chargers.

While the final score was 27-15, East St. John controlled much of the first half.

Madison Prep grabbed a 7-0 lead to start the first quarter, but the Wildcats, led by sophomore quarterback Adarius Duhe, who suffered a back injury in the process, marched right down the field for a touchdown.

The Wildcats added a two-point conversion to capture a 8-7 lead, which they held through the rest of the first half.

East St. John had a chance to increase its lead after driving to the Chargers one-yard line later in the half but were unable to punch in a touchdown in four tries, instead turning the ball over on downs.

“We went down there and went backwards,” East St. John head coach Alden Foster said. “We got stuffed. So we tried to pass and got a penalty and got pushed back.”

The Wildcats’ fate was sealed in a disastrous fourth quarter that saw the Chargers score two touchdowns off Wildcats fumbles deep in their own territory and add another score on a long drive to make the score 27-8.

It was not until Duhe was put back in at quarterback that East St. John saw any success. Duhe scored on a quarterback keeper with 2:13 left on the clock, and the Chargers held on for the win.