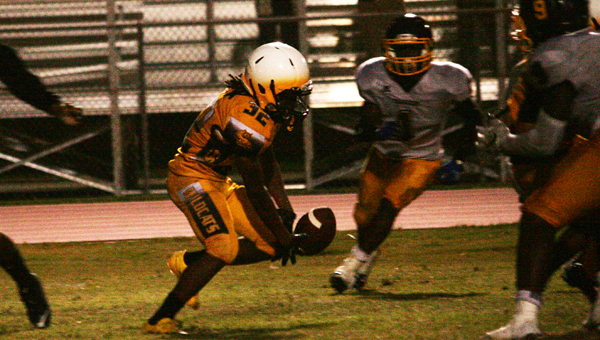 RESERVE — The East St. John Wildcats entered their home opener in week 3 winless and left the same way after being beaten by the Madison Prep Chargers.

While the final score was 27-15, the Wildcats only scored their second touchdown of the night with less than two minutes to go.

The first half, however, went in the favor of East St. John.

East St. John players burst through a banner at halftime of their home opener versus Madison Prep.

Madison Prep came out to a 7-0 lead to start the first quarter. But the Wildcats, led by sophomore quarterback Adarius Duhe marched right down the field. After Duhe went out with a back injury, senior quarterback Alvin Jackson made his first appearance for the Wildcats in two weeks, throwing a touchdown pass to Da’Monte Coxie.

The Wildcats added a two-point conversion to capture the lead 8-7, which they held through the rest of the first half.

East St. John had a chance to increase its lead after driving down to the Chargers one-yard line later in the half but were unable to punch in a touchdown in four tries, instead turning the ball over on downs.

“We went down there and went backwards,” East St. John head coach Alden Foster Foster said. “We got stuffed. So we tried to pass and got a penalty and got pushed back.”

It appeared the Wildcats may have a chance to hang on for the win when they kept the Chargers scoreless in the third quarter. But any chance the Wildcats had fell apart in a disastrous fourth quarter that saw the Chargers score two touchdowns off Wildcats fumbles deep in their own territory and add another score on a long drive to make the score 27-8.

It was not until Duhe was put back in at quarterback that East St. John saw any success diving the ball down the field. Duhe scored on a quarterback keeper with 2:13 left on the clock and the Chargers held on for the win.

“We didn’t take advantage of opportunities,” Foster said. “We missed a few big plays that could have been touchdowns. You just can’t do that type of stuff, like fumbling the ball at inopportune times.”

Foster said he felt the Wildcats were the better team in the contest and lost due to poor execution.

“We’ve got to keep working,” Foster said. “I am aggravated right now, extremely. This is a game we should have won. We need to finish drives and finish the whole thing.”

In a talk with his team after the game Foster said the Wildcats should forget about the first three games and wipe the slate clean before entering district play.

“District starts this week and we’ve just got to put a whole game together and show signs we can play football,” Foster said. “You have got to play through it. We are going to go back to the basics again. When district starts we are in a new season.”