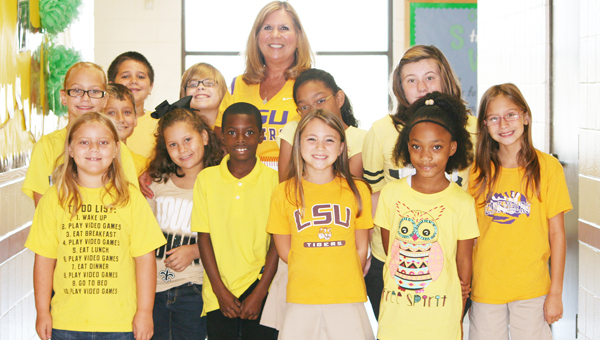 John L. Ory fourth grade teacher Karen Dottolo stands with the members of her class who dressed in gold Wednesday to support schoolmate Joseph Carr, who is battling brain cancer. Members of the school community are hosting numerous fundraisers for the family. (Raquel Derganz Baker/L’OBSERVATEUR)

LAPLACE — In spirit of Child Cancer Awareness Month, one local school community is doing what it can to raise money and awareness for one of their own suffering with cancer.

During their normal assembly, kindergarten through second grade students were asked a few questions about Joseph, like what he enjoys doing and what are his favorite toys.

The children raised their hands and told Sylvain how Joseph likes Legos, wearing his cowboy boots and reading.

Cynthia Terrio, one of the school office staff members, spoke to students about her daughter’s battle with cancer.

She told the students how every donation, even $1 or $2, really helps.

The children also got the opportunity to watch a short informational video about childhood cancer, learning 36 children are diagnosed with cancer every day and four children die from the disease each day.

Ory Goes Gold Day raised $400, but it isn’t the only fundraiser school members are hosting to help Joseph.

“For the next two weeks, the 4-H club here is doing a coins for kids cancer fundraiser,” Sylvain said. “Kids bring in coins, and the class that raises the most money at the end of the fundraiser will receive an ice cream party.”

As of Wednesday, the school had raised $750 in coins.

Sylvain said it was around Mardi Gras time when Joseph was diagnosed. He went home one day with a headache, and the next thing his family knew the young boy had brain cancer.

“Joseph is a sweet, fun-loving kid,” Sylvain said. “He loves reading. Even in the midst of going through treatment, something that has kept him together is being able to work on his school work.”

The school has already sold “Joseph’s Journey” shirts with the proceeds going to his family.

“Here at school we have started using his saying ‘cowboy up,’” Sylvain said. “Whenever he was going through something difficult or he knew he was going to go through treatment that was hard for him, Joseph’s saying was he was going to ‘cowboy up.’ He loved wearing his cowboy boots.”

Unfortunately, Joseph has not been able to attend classes this year, but there is still a desk waiting for him when he returns.

“He still has his place here at John L. Ory, his name is still on the roster,” Sylvain said.

After all the fundraisers are done, the school will give a check to Joseph and his family.