SCC, WSJ stay perfect in week 2: Comets, Rams look like teams to beat in 2A 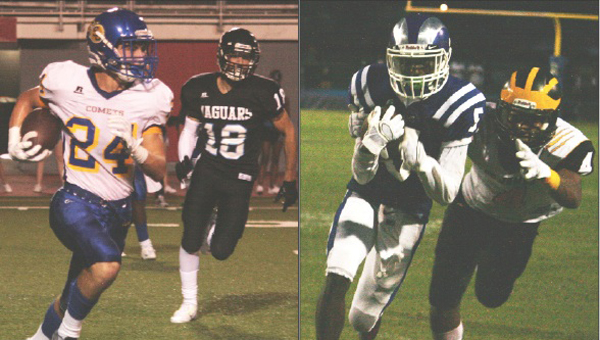 MARRERO — The St. Charles Catholic Comets and West St. John Rams are the only St. John the Baptist Parish teams to maintain a perfect record after the second week of the season.

The Comets (2-0) completed their second on-the-road shutout in as many weeks Friday with a 36-0 thrashing of the Thomas Jefferson Jaguars.

The Comets scored on five straight drives and barely let the Jaguars pick up a first down on their way to a 29-0 lead. Leading the way for St. Charles Catholic was tailback Justin Loupe, who started off the game with a 40-yard run on the first play and picked up three more carries on the opening drive before running in an 8-yard touchdown.  In the second quarter, Loupe struck again when he found a corner and sped past Jaguars defenders for a 69-yard rushing score.

“I hadn’t had a rushing touchdown this year, so it felt pretty good to get one,” Loupe said.

Sophomore quarterback Lloyd Nash got the first start of his career going 3-of-6 for 41 yards in a run-heavy game.

Despite the shutout, St. Charles Catholic coach Frank Monica said he was not pleased with the way his defense performed, starting with a muffed punt near the end of the first quarter and a nine-minute drive by the Jaguars in the second quarter.

“I thought we played lazy and complacent and didn’t play with that swagger that you need to play with,” Monica said. “We are going to face some 4A and 5A opponents in the next three weeks. We are going to have to lift up our intensity and our hustle, and I am very disappointed with that part of it.”

Coming into the game, the Rams were expecting to see a lot out of the Tigers’ passing game, especially going in the direction of 6-foot-5, 230-pound wide receiver Stephen Sullivan. The Rams secondary was able to contain the LSU commit.

“Our cornerbacks wanted to step up to the challenge,” West St. John head coach Brandon Walters said. “Our guys are pretty short on the corners, but they play big. They didn’t back down from it, we kind of got in his face. He is a great athlete.”

The Rams secondary ended the night with three interceptions, two of which went to free safety Jamal Walters and the other to Kie’Ave Harry.

“Up front we had some guys who pressured the quarterback a little bit,” Walters said. “They were making plays inside. We got after them up front and forced them to get the ball out a little quicker than they wanted to. It went in our favor.”

Walters said he was pleased with how his team came together.

“We haven’t beat Donaldsonville in the ten years I have been here,” Walters said. “We have had them on the schedule a couple of times. It is pretty big for the program to get that off of our backs.”