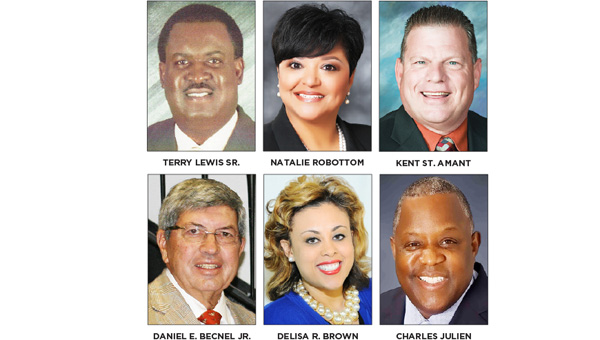 A half dozen local residents threw their names into the political hat this week, declaring their official candidacy for St. John the Baptist Parish’s chief elected official.

LAPLACE — A half dozen local residents threw their names into the political hat this week, declaring their official candidacy for St. John the Baptist Parish’s chief elected official.

Incumbent Parish President Natalie Robottom faces a stiff challenge this fall as a diverse group of five challengers are vying for the office.

Robottom described the large field as part of the “democratic process.”

“I think our residents and voters are smart,” she said. “They are going to look at qualifications, experience and productivity. I think my record speaks for itself. It’s proven leadership with results that are … visible. They will vote accordingly.”

Robottom said separating herself in the crowded field will be “fairly easy” because her leadership has already made a difference.

“There needs to be someone who is familiar with government, government processes and funding,” she said. “Putting residents and their needs first is important.”

When contacted by L’OBSERVATEUR this week, each parish president challenger cited a general dissatisfaction with the incumbent for stirring up a large field of candidates.

Brown, a minister with Faith Healing and Deliverance Ministries Church, said the parish’s state of affairs has created a need for change.

“I’m more than sure someone has inspired or encouraged (the candidates) to run, so it’s really a cry for help from the people of St. John, saying a change is needed,” Brown said. “What separates me from the other candidates is that I’m not a politician. I am a public servant, and my duty is unto the people of St. John. I think all the candidates are great people, but we all stand for different things. I wish them all the best.”

A local businessman and a trial lawyer for 47 years, Becnel said a deep dissatisfaction with St. John’s current government led to his decision to run for office.

“So many of the (parish) department heads are from outside of the parish,” he said. “I have watched us lose 10,500 people in the last 15 months, and most of the people that are leaving are people that pay taxes. The parish has no basis to be able to support itself anymore.”

Becnel said most local manufacturing plant employees don’t live in St. John and none of the management-level employees do.

“That is completely different then it was just a few years ago,” he said. “They drive in and they drive out. They don’t spend any money in our stores. They don’t even buy gas in our town anymore.”

Becnel said he is not going to have trouble differentiating himself from the crowded field because “virtually everybody knows who I am,” adding at one point he has probably represented everyone in the parish over the 47 years he has practiced law.

If elected, Becnel said he would not accept a salary.

“With six candidates in the race, I feel the race is wide open, and the people are tired of the same old hum drum,” Lewis said. “They are looking for a change right now. I’m going to be honest, open and transparent with my candidacy and campaign.”

Lewis said he would differentiate himself to voters in the next several weeks with his accessibility to St. John constituents.

“I’m going to sit down and listen to them and get a feel for what they are looking for in their leader for the next four years,” he said.

Julien, a former St. John the Baptist Parish Council member, said all the individuals running are people who have a vision they feel would be better for St. John.

Julien said his experience on the Parish Council and an English education background separates him from the field of candidates. He said he has the ability to communicate with the Council and others, such as the School Board and Sheriff’s Office.

“I think it’s having the relationships and the know how to work with the community, knowing that the community wants a parish president who is accessible,” Julien said. “I’m a local, homegrown individual, and I think that my experience in education and on the Council will allow me to move our parish forward.”

St. Amant described St. John the Baptist Parish as “in a state of urgency.”

“I am a strong advocate for our children, the elderly and those with special needs, because they deserve nothing less,” St. Amant previously told L’OBSERVATEUR readers. “My diverse background is why I’m best qualified to lead St. John Parish to much greater success. I look forward to meeting you and hearing from you on the campaign trail.”

Learn how to receive $$ for Isaac recovery