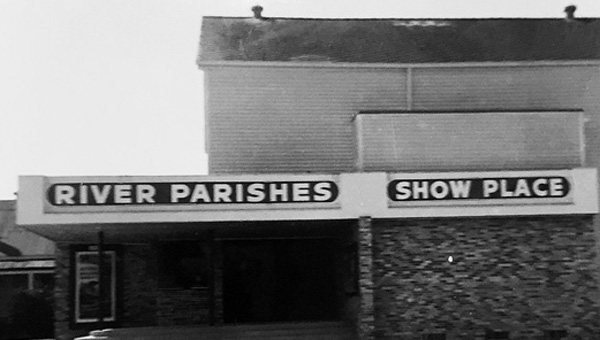 The façade of the building on West Fourth in Reserve offers few clues to its history. For that, and the stories that preceded what is now St. John Theatre, one need only read the extensive scrapbooks left by Louis J. Maurin Sr.

The first silent movies in Reserve were shown in the New Sugar Belt Club, owned by Pierre Rene Montz, and located near St. Peter Church on River Road. The building was sold to Fortune Maurin Sr. in 1917 and relocated to the corner of River Road and West Fourth. There it was renovated and reopened in 1918 as The Liberty Theatre by Louis J. Maurin Sr.

“Having no electricity available, we bought a Delco light plant with a large set of batteries taking care of movies and the club,” Maurin wrote in his scrapbook. “Electricity was available in 1922 from an electric plant in LaPlace.”

Dances, orchestra performances and vaudeville shows were also held at The Liberty Theatre, providing entertainment for the area’s residents. As movies graduated from silent to sound, Maurin built a new theater (presently St. John Theatre) and opened Maurin’s Theatre in 1931.

More improvements came in 1937 when air conditioning was installed in the theater, making it the first movie house between New Orleans and Baton Rouge to offer the luxury.

“In addition to the movies, the people of Reserve and the surrounding communities could participate in Amateur Night, Beauty Contests, Magic Shows, Hot Seat Night, Turkey Night (five turkeys given away each night), Bank Night and many other activities,” said Gerard Montz, grandson of Maurin. “Huntz Hall of the Bowery Boys made an appearance at the theatre, as well as Republic film star Monte Hale and RKO Pictures star Ray ‘Whip’ Whitley.”

While Maurin was busy operating the theater, Jack Snowdy, a young man from north Louisiana who wanted to become a teacher, was writing 64 letters, one to each parish in Louisiana, seeking employment. St. John was the first to respond, and in 1953 hired Snowdy to teach English at Leon Godchaux High School.

Upon meeting him, Maurin offered to show the movies of the novels studied in class.

“He directed many plays at Leon Godchaux, but the first musical was in 1963,” Judge Sterling Snowdy recalled of his father. “It was ‘Camelot,’ and the students sang along to the album.”

Despite the various themes of the musicals he directed at the high school and later in the community during the summer, all had one common element: Snowdy included a waltz in each.

“People still stop me to tell me that my dad taught them how to waltz,” said Judge Snowdy.

Beginning in 1974, a group of citizens saw the need for a cultural center in St. John and began to campaign for such. A referendum on the ballot in 1978 lost by only 21 votes. While interest in live theater grew, movie attendance was down. On May 27, 1979, Godzilla vs. Megalon became the last movie shown in Maurin’s Theatre.

“It was both special and sad to be there with great friends for the final show,” said Reserve native Jackie Cox Taylor. “We spent many weekends there together. It was the end of an era.”

A few months later, in January 1980, voters defeated a second attempt for a cultural center. At this point, the Parish Council unanimously voted to allocate funds to purchase Maurin’s Theatre and lease it to the Cultural Center Committee.

The doors to the historic building reopened as St. John Theatre on July 23, 1981, with the musical “South Pacific,” directed by Jack Snowdy.

Since then, it has been the site for beauty pageants, talent showcases, a yearly living Christmas tree, Gospel Extravaganzas, at least three plays per year and the Missoula Children’s Workshop.

A director to the end, Snowdy specified the details for his funeral only a few months before his death in 2005; his legacy to provide fine arts activities for the community lives on.

This past summer, under the direction of Greer Millet, “Annie Get Your Gun” graced the stage of St. John Theatre. Judge Snowdy conducted the orchestra and produced the show, while his wife, Hope, served as the director’s assistant.

Their son, Jordan, was the stage manager, and daughter, Lauren, filled a main role in the production and was the choreographer. Following in her grandfather’s footsteps, Lauren included a waltz.

Although it’s been more than 35 years since operating as a movie theater, Snowdy said occasionally someone calls the theater to ask, “What movie is playing tonight?”

While movies may not be in the script for the future of St. John Theatre, thanks to the dedicated efforts and support from residents of the River Parishes, the shows go on.