Riverside, ESJ looking to rebound after week one losses 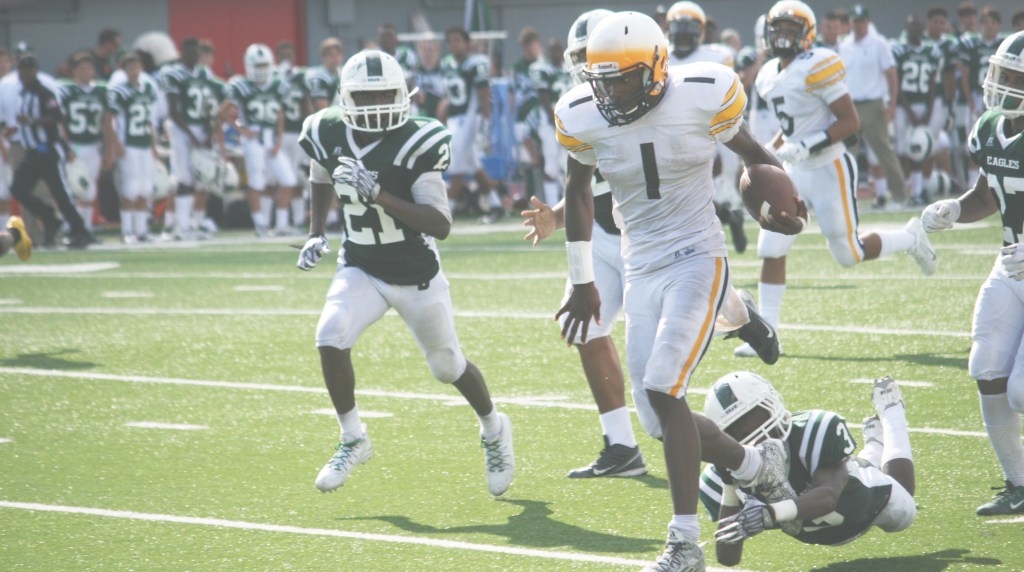 Da’Monte Coxie steps out of a tackle en route to an 80-yard rushing touchdown. Coxie will take over at quarterback this week versus John Ehret. (Kyle Barnett/L’OBSERVATEUR)

RESERVE — Riverside Academy and East St. John are looking to bounce back Thursday night after suffering losses in week one of the football season.

The Riverside Academy Rebels will take on a very strong opponent for the second week in a row in the Parkview Baptist Eagles in a game schedule for 7 p.m. Thursday at Riverside.

“They are an excellent football team,” Riverside Academy head coach Bill Stubbs said. “They played a really good team and beat them last week. So they are very well coached. They are good football players on both sides of the ball. They don’t have a whole lot of weaknesses.”

On offense the Rebels will again start Herb McGee at quarterback. The LSU commit has been a wide receiver for the past few years but has been forced into action under center due to injuries to sophomores Jordan Loving and Jared Butler.

“What we are having to do with Herb is get him comfortable with the things he can do and do well and just wrap everything else around that because it all starts at that position,” Stubbs said. “That is what we are trying to do this week.”

The Rebels will also be working on their special teams, which struggled last week. Against John Ehret, the Rebels gave up two first downs off of fake punts and failed on a fake punt themselves that led to John Ehret’s winning touchdown.

The Rebels will have to be on top of their game to keep up with Eagles quarterback Jarious Robertson.

“The quarterback is very, very good and the running back is good when they come off the ball,” Stubbs said. “I don’t see a lot of weaknesses in any phase of their football. They are very well-disciplined and they are very well coached. They’ve got good football players and I think one kid that makes it all run is their quarterback, He is good and quick and he runs their offense very well.”

Stubbs said he is looking forward to another tough game and is trying to keep his team focused leading up to it.

The contest will be televised on Fox Sports Southwest beginning at 6:30 p.m. CST.

Only five days after a big loss at Hoss Memstas Stadium in Harvey, the East St. John Wildcats will head back to the west bank stadium to take on another tough opponent in the John Ehret Patriots at 7 p.m. Thursday.

Wildcats fans were able to see a glimpse of the future when senior wide receiver Da’Monte Coxie took over in place of Jackson and took in an 80-yard quarterback keeper for what was one of only two Wildcats touchdowns on the night.

East St. John head coach Alden Foster said Coxie had been working at quarterback for special packages, but did not envision him being the starter.

“Right now he is the best option we have,” Foster said. “We started working him some last week under center and he is just a great athlete, a great football player. He brings the offensive line to another level, they feel more comfortable.”

Despite his relative inexperience at quarterback, Foster said he has confidence Coxie can run the offense well.

“He can run the zone read and all of that type of stuff,” Foster said. “He is an athlete. Most of the spread stuff he can do, and he can throw it well enough to keep everybody honest. He can throw the deep ball.”

The Wildcats will have receivers who have shown they can catch the ball as well in Arlandrian Martin and C.J. Turner, who had a breakout performance including one touchdown reception last week.

Sophomore Adarius Duhe, who lost the quarterback battle in the summer to Jackson and has been starting at cornerback, is also expected to take some snaps at under center. “Duhe is an athlete, as well, and can throw the ball and run it,” Foster said.

The play at quarterback will have to be exceptional to deal with John Ehret’s stiff defense that features Division I recruits.

“They are really aggressive and huge up front — those things they’ll play,” Foster said. “They are solid across the board. They are a veteran football team. They have a lot of seniors.”

The Patriots also may have to start a backup at quarterback. In last week’s win over Riverside Academy, quarterback Ca’Ron Baham, a University of Missouri commit, was injured and his status is unknown.

Foster said the Patriots showed their ability to handle adversity in Baham’s absence by beating Riverside in the last few minutes.

“When they had their quarterback go down, other guys stepped up for them,” Foster said.

“Even when they fell behind against Riverside, they had guys make plays. Those are things that give you concern.”

Foster said he feels if his team plays its best ballgame possible and minimizes mistakes, the Wildcats will have a chance to win.