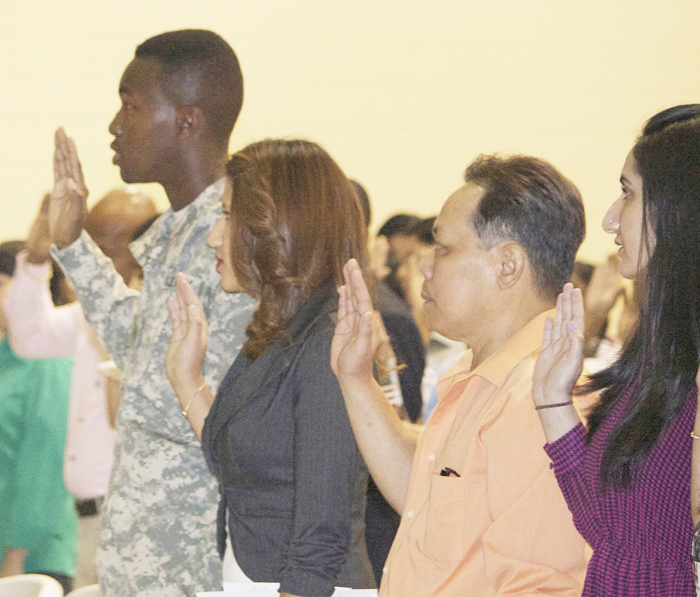 LAPLACE — With smiles on their faces and flags waving in the air, 150 people took their first steps a U.S. citizens in St. John the Baptist Parish.

The naturalization ceremony took place Wednesday at the St. John the Baptist Community Center and started off with a short video showing photos of past ceremonies set to inspirational music. After Customs Boarder Patrol Honor Guard made their way to the stage, Chris Workman of LaPlace American Legion Post 383 sang the National Anthem.

The National Commander of the American Legion Mike Helm also welcomed the soon-to-be new citizens. As commander, Helm envisioned the Legion be part of this naturalization process. He wanted the Legion to work with immigrants.

This week’s event was the first time U.S. Citizenship and Immigration Services’ New Orleans District has held a ceremony in conjunction with the American Legion.

Helm said he was overwhelmed with the number of people participating. He thought maybe 30 or 40 would make it, but was pleased to see 150 in attendance Wednesday morning.

“For those of you in the front row, let me say this,” Helm said as he addressed the crowd, “Welcome.”

After the commander spoke, Merrilyn Onisko, community relations officer of the New Orleans field office, did the “call of countries.” She listed the 45 countries that were represented and had the soon-to-be citizens stand when their country of birth was called. As the countries were called, cheers could be heard from the families of participants.

“I would like to present 150 candidates representing 45 countries,” Onisko said. “Each applicant has been examined under oath by a designated officer and has demonstrated an understanding of the English language and a knowledge and understanding of fundamentals of the history and principles of the form of government of the United States.”

Stanley Crockett, field office director of New Orleans, asked the candidates to stand and raise their right hands so they could take the Oath of Allegiance.

After the candidates said “So help me God,” Crockett announced we now have 150 new citizens. The whole room followed with an eruption of cheers.

After the cheers had subsided keynote speakers Philip Bace and V.J. St. Pierre spoke to the crowd.

“Let me be the first to welcome the new U.S. citizens,” Bace said.

Bace is the assistant director of adjudications and St. Pierre is St. Charles Parish President.

“You made a choice to become an American,” Bace said. “This choice you made might not have been easy for you or your family, but I have the utmost respect for you for making that choice and for making America a stronger country.”

The ceremony ended with the new citizens standing and saying the Pledge of Allegiance followed by a video message from President Obama.

After the video messages had finished, with smiles on their faces the new citizens received their certificates.