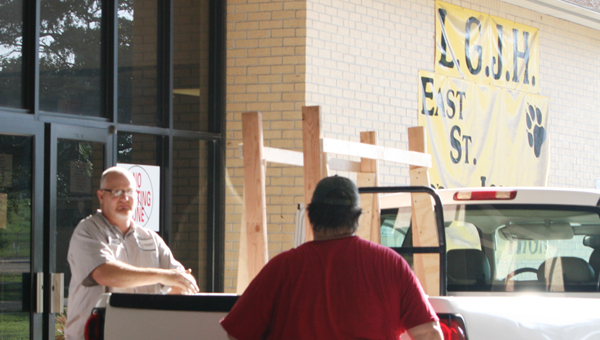 “Last Thursday around midnight we know that East St. John Elementary School was on fire. But since then, I think all of St. John the Baptist Parish has been on fire (in) coming together to work as one to make sure we get our schools up and running.”

Superintendent Kevin George opened up this week’s regularly called St. John the Baptist Parish School Board meeting with those remarks.

George spent the beginning portion of Thursday’s meeting highlighting the many groups and individuals that have helped since a fire severely damaged the main structure of East St. John Elementary School.

Students of that school have been displaced from classes since Aug. 13 as School District officials work to secure suitable accommodations.

Lake Pontchartrain Elementary students, who attend classes in portable buildings on the East St. John campus, were able to return to school this week in those same structures.

“We will firm up that timeline early next week,” George said.

The School Board has awarded Veterans Construction a $120,000 contract to refurbish the Leon Godchaux campus in anticipation of serving the more than 600 East St. John Elementary students.

On Thursday, George said Veterans Construction officials assured him they would do everything they can to meet the timeline, adding they feel confident they would deliver the school a day early.

At the time, construction officials said the work would be complete by Aug. 27, allowing school officials time to bring in equipment in preparation of the students’ arrival Aug. 31.

The majority of work being performed at Leon Godchaux will take place in the main building, where the classrooms are primarily located.

Installing a new drain, performing kitchen pest control and improving sewer work are also scheduled. In the interim, the School District partnered with New Wine Christian Fellowship and Marathon Petroleum Corporation to provide a camp for East St. John Elementary School students that runs from 7 a.m. to 2:40 p.m. Monday through Friday. Bus transportation provided by the school district is available.

Before and after care is also available for a charge beginning at 6 a.m. and ending at 6 p.m. for parents providing their own transportation. School Board President Keith Jones said Marathon Petroleum Corporation is funding the camp’s main hours at no cost to the School District.

Jones was also very appreciative of Superintendent George and his staff, who he said have worked countless hours in the days since the fire.

“The superintendent and his staff have been everywhere, non-stop,” Jones said. “That is one of the reasons we extended his contract another three years, and that was prior to the fire.

“He has done a great job. He is a great superintendent.”

Included in this week’s School Board meeting were several recognitions as George and the School Board presented plaques to St. John Parish, St. John Sheriff’s Office and four area fire departments for their quick and tireless response to the fire that engulfed East St. John Elementary during the early a.m. hours Aug. 14.

In other business, School District Director of Finance Felix Boughton reminded the Board about where District employees stand in relation to a quarter-cent sales tax in the parish.

Boughton said parish voters elected in April of 2014 to rededicate proceeds from that tax — which in the past had gone directly to teachers — to all District employees.

The rededicated sales tax, according to Boughton, can only take effect at the beginning of every quarter.