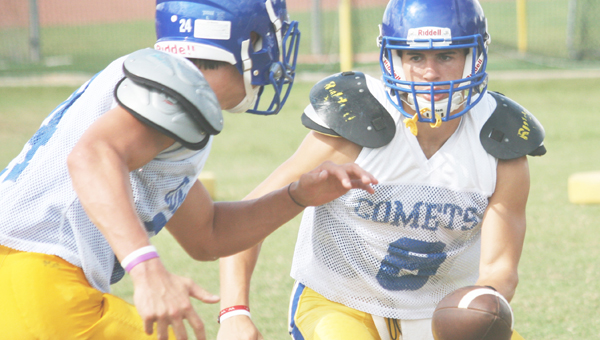 LAPLACE — St. John the Baptist Parish’s two private school football teams have experienced a lot of success over the past few years and hope to keep that going as they enter this year’s scrimmages.

Riverside Academy will take on Vanderbilt Catholic at 5:30 p.m. Friday in Reserve.

In the matchup Riverside will be looking for players to step in for starters who have already suffered injuries early on.

“We are still looking at our guys, a lot of folks,” Riverside head coach Bill Stubbs said. “We have a considerable amount of injuries to guys that probably won’t play on Friday, but it gives us the opportunity to look at some other guys.”

The biggest setback is the loss of sophomore quarterback Jordan Loving. Loving started as a freshman last year and led Riverside to 11 straight wins before the team lost out in the semifinal round of the playoffs.

However, Stubbs mostly downplayed the importance of the scrimmage, deeming it nothing more than a chance for his players to match up against other kids they are unfamiliar with.

Still Stubbs said matching up against another squad changes the dynamics and may provide incentive for his boys to step up.

“Going up against another color jersey sometimes gets them some more juice in their tank,” Stubbs said.

Along those lines Stubbs said his players will have a chance to show what kind of shape they are in and for some underclassmen to work their way into playing time for the season.

Head coach Frank Monica said the matchup against last year’s 3A state champions will be a good measuring stick for his team’s progress.

“They have a lot of people coming back from last year defending their championship, so it is a big step up,” Monica said. “We are making the competition so tough it gives you a pretty good barometer so you know exactly who you are.”

Coming out of the scrimmage Monica’s goal is assessment.

“That is the most important thing, to evaluate our talent to see if they know their assignments or not,” Monica said. “I think that is basically what I’d like to get out of it, just to make sure we know what we are doing and look at our schemes and not be concerned with so much the final outcome.”

Monica said the scrimmage will offer him insight into what the team needs to work on before the season opener in two weeks.

“I’ll be looking at effort, and we’ll be looking at assignments and taking care of the football,” Monica said. “That is the biggest thing you look for in the scrimmage. It doesn’t count for anything, but I think anytime you compete, it is important that you do well.”

In any case, Monica said he feels the exhibition game will be positive for SCC.

“There are question marks you have going into the scrimmage,” Monica said.

“You don’t know if you would ever be relieved of those in this situation but it will certainly help you evaluate and give you a little more verification on what to do. If a scheme is bad or if a player is not performing up to par, then that all will be revealed on Thursday.”