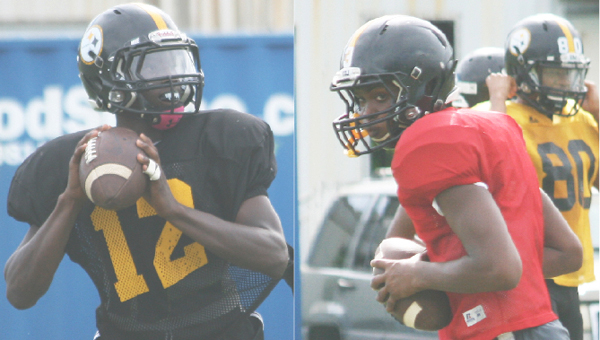 Sophomore Adarius Duhe, left, and senior Alvin Jackson, right, are locked in a battle for the quarterback position for ESJ. Head coach Alden Foster is hopeful their scrimmage performances settle the matter.

LAPLACE — The public high schools in St. John the Baptist Parish both saw an overhaul in their football coaching staffs leading into the 2015 season and this week’s scrimmage.

Alden Foster is preparing to open his first season as head coach of the East St. John Wildcats. Foster saw time as head coach during the program’s spring game and has been working with his team for the past few months to prepare them for the 2015 season.

Foster said his players are looking forward to facing off against another team for the exhibition.

Foster said he is looking forward to seeing his players in action.

“We are going to be focusing on trying to execute to the best of our ability,” Foster said. “It is really important that you don’t turn the football over, don’t give up the big play, establish the run game — all of the little things you want to see.”

Part of the scrimmage will focus on trying to determine who ESJ’s starting quarterback will be for the season. Transfer Marquise Darensbourg led Destrehan to the 5A state championship last year but was ruled ineligible to play for ESJ this year after the Louisiana High School Athletic Association determined he transferred for “athletic purposes.” While ESJ is appealing the ruling on Darensbourg, which will be announced a day prior to the beginning of the season, two other quarterbacks are competing to lead the offense. Senior Alvin Jackson and sophomore Adarius Duhe are expected to split time at quarterback versus Edna Karr.

Foster said he hopes to have a better idea of who the starter will be based on each player’s performance.

As far as his team as a whole is concerned, Foster said ESJ will have its hands full going up against Edna Karr and he is interested in seeing how well they handle the competition.

“We are going out against a very good football team that is really impressive on film,” Foster said. “They actually had their way with another 5A school in West Jeff in the Spring. So the main thing is just to try to come out healthy of course and focus on the little things that are going to help you be successful in the future.”

West St. John will travel to Lutcher for a scrimmage at 6 p.m. Thursday.

WSJ’s Brandon Walters is entering his first year as head coach. Walters was named to the position last month after Robert Valdez abruptly resigned after seven years to take over at Scotlandville.

Walters served as defensive line coach for nine years at WSJ and said he is confident he will be able to pick up where Valdez left off.

“I was there for the spring game,” Walters said. “We did 7on7 with them the entire summer. Coach Skip (Lamothe) and I were the two coaches that took them to Georgia for the Adidas 7on7 tournament. So I have some experience with them.”

Lamothe is taking over for departed offensive coordinator Kris Peters.

This early in the year, Walters said he only hopes the scrimmages gives his players the chance to prove they have mastered the basics.

Walters has taken a different approach to summer practice from many coaches by limiting contact and saving his players full effort for the season.

Against Lutcher, Walters will be looking to identify players who may be able to step up this year and work their way into the starting lineup.

“We are always looking for the next set of guys, the next guy that can kind of add some solid base to what we are doing to some guys that are already up there,” Walters said. “So the scrimmage will help us identify some of our younger guys we need to play in certain spots and see who is hungry and see who can actually compete to take a guy’s spot. In some places we are really not set in stone. If there is some guy that can get in and help compete or challenge another guy for position or playing time, we look at that also.”

While Luther is a much larger school at 4A in comparison to WSJ’s borderline 2A program, Walters said he does not feel his team will have any trouble stacking up against them.

“They can’t play but 11,” Walters said. “Other than it is just guys standing on the sideline. They are still going to put in their best guys against our best guys — only 11 at a time and we can handle that.”