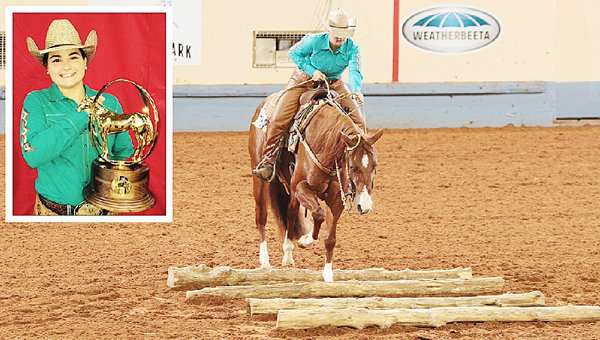 Shelby Reine poses with the trophy and awards she took home from the Horse Youth Association Championship Show.

Shelby Reine, a junior at St. Charles Catholic High School, where she is a member of the Equestrian team, competed in the championship this month in Oklahoma City.

“It was a dream come true the first time I won a World Champion title,” Shelby said. “Winning my second World Title was beyond my dreams.”

According to Shelby, 16, the ranch riding course simulates horse riding outside the confines of an arena and reflects the versatility, attitude and movement of a working horse. The class is judged on the horse’s ability to work at a forward-working speed while performing the required and optional maneuvers.

“The required maneuvers are the walk, jog and lope in both directions, the extended trot and extended lope at least one direction as well as stops, back and one change of direction,” Shelby said.

Approximately 130 entries were in the prelims of the competition Aug 3. The top 15 scores automatically advanced to the finals. After the semi-finals there were 20 riders left competing in the finals on Aug 4., and Rein was one of the finalists. Scoring is on a 0-100 point scale with 70 denoting an average performance.

“Not many riders accomplish a World Title and even less ever accomplish two World Titles in the same event,” Shelby said. “I am very proud of my horse Load.”

According to Shelby the most important component in training is keeping yourself and your horse in top physical and mental shape.

“In October 2014, Load and I won the Levels 1-3 Heritage Reining Futurity and we were Reserve Champions in Level 4,” Shelby said.  “I am very pleased with the awards Load and I have accomplished as a team and I look forward to competing in more major horse shows with him.”

“The finalists were awarded starting with 20th place working down to the Champion,” Aisha Rein, Shelby’s mother, said.

According to her mother, her family knew Shelby had a nice ride but had no idea how she placed.

“When they were down to the Top 3 in the world and Shelby was still standing, we were beyond excited,” Aisha said. “When her name was announced as the World Champion, we all burst with joy.”

Along with winning her second World Title in ranch riding Shelby was also a World Finalist in reining on the horse Alley Cattin King.

“The work ethic an dedication Shelby has gained from riding horses is a life skill that she will forever possess,” Aisha said. “She has a gift, but she also puts forth time and effort to always better herself and to continue to grow as a rider.

“She has accomplished a goal twice, that many only dream of.”

Shelby would like to thank her parents, grandparents and trainers Sebastian and Melanie Petroll for all of their knowledge and support.

“I could no be the rider I am today without the support of my family, trainers and friends,” Shelby said.