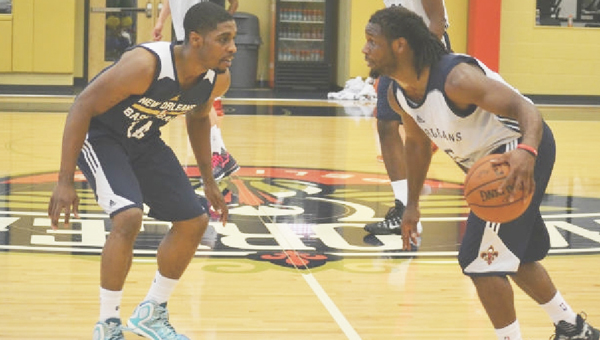 Carter was the highest scoring player in U.S. high school basketball history, leading Reserve Christian to five state championships before graduating in 2006 and following that up in the college ranks, playing four years at Baylor University.

Undrafted out of college, Carter has bounced around the pro basketball ranks, starting off in the summer league with the New Jersey Nets in 2010 before making the preseason team for the Oklahoma City Thunder and being sent to play for the team’s developmental league squad and then going on to play in the international pro basketball scene in such diverse places as Israel, Croatia, the Czech Republic, France and Germany.

Tweety Carter, left, said one the most difficult aspects of playing international basketball is being away from his wife Brittney Carter and their three children.

After playing internationally for the past five years Carter got another shot at the NBA this summer when he was invited to the NBA summer league in Las Vegas by the Pelicans. While Carter did not see a lot of playing time he said the experience was a positive one.

“In this profession you have to take it for what it is and learn from it and appreciate every opportunity you do have,” Carter said. “That is what I try to do. I was very appreciative to be able to compete for and make the summer league team. I made it. Unfortunately I didn’t get a chance to play as much as I would have wanted to, but I am blessed to be a part of the organization for the summer league.”

The Pelicans ended their summer league in the quarterfinals. While the summer developmental league is more of a tryout for potential NBA player and is not the NBA proper, Carter was pleased.

“I learned a lot of things in the organization in the two weeks we were there,” Carter said.

“I got a chance to go travel and go to Vegas and play and enjoy the moment.”

The Pelicans did not offer Carter a roster spot on their regular season team, but he will continue to play on the professional level wherever he can.

“As far as for the future, I am just going to keep my head held high,” Carter said.

“I don’t have anything negative to say about what I went through. I went though it for a reason and I am just blessed and honored to be able to come back and compete again in the NBA.”

Carter does not know where his next stop is, but he has already been offered roster spots by a couple of international teams.

“It is a grind,” Carter said. “Basketball over there is really competitive, it isn’t just a cakewalk for Americans. You really have to go over there and play just like you have to do in the NBA.”

While Carter is happy to have a career playing professional basketball overseas, it is tough to be away from his pregnant wife and three kids for extended periods of time.

“It is just the traveling that is the tough part you have to adjust to because you are away from your family for ten months. It is big stretch it is like you are in the Army or sure except you are not fighting for your life.”

Still, while Carter said he feels blessed to be able to play professional basketball internationally, he is eager for another shot at the NBA.

“Going through the (summer league) process, they were just telling me to stay ready and keep doing what I am doing,” Carter said.

“The only thing is to stay ready and keep waiting for your name to get called. That is what it is about, waiting and staying positive and staying with it.”