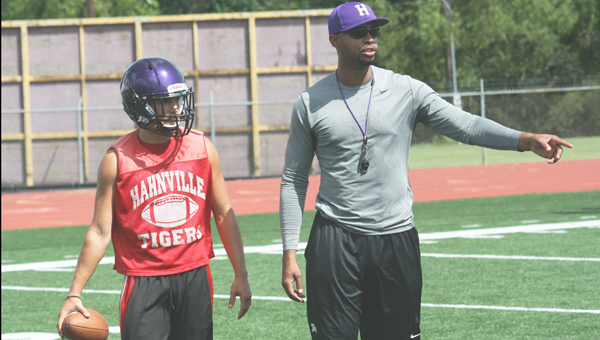 BOUTTE — Along with a newly installed offense, Hahnville High School has hired a former pro quarterback as offensive coordinator and quarterbacks coach to ease the transition.

Lester Ricard knows the quarterback position and how to successfully run an offense well.

He had a standout prep career at Amite High School and went on to start three seasons for Tulane University, where he put up eight 300-yard passing games over his career, including a 409-yard 3-touchdown performance against Army in his senior season and a 417-yard, 6-touchdown game against the University of Alabama at Birmingham as a sophomore.

Hahnville starting quarterback Mike Neal is looking to air out the ball this year as he transitions to a passing offense. (Kyle Barnett/L’OBSERVATEUR)

However, the former Tulane quarterback never caught on with an NFL team for the long-term. He had two short stints in NFL training camps with the Jacksonville Jaguars in 2007 and Carolina Panthers in 2008 and with the Canadian Football League’s Edmonton Eskimos in 2009.

Only five years ago Ricard was still trying to eke out the pro football dream, but the Denham Springs-native knew by 2011, after a short stint with the Arena League’s New Orleans VooDoo, it was time to move on.

“I was up there for two weeks,” Ricard said. “After I looked up, I realized arena football wasn’t for me. I had a meeting with the coaching staff and said, ‘this isn’t for me I had better do something else.’”

Ricard has firmly staked his place in the coaching realm, entering the profession at De La Salle High School as quarterbacks coach in 2013 before spending the 2014 season as head coach of the 1A St. Martin’s Saints, who he led to a 5-5 record. However, he still misses playing.

Despite missing playing the game Ricard is happy with how things have turned out for him. Ricard is focused on development and looking to make a difference in the lives of not only football players, but others as well. In addition to coaching Ricard is a minister, which he said has parallels with coaching and teaching.

“Whether it is religion, teaching or coaching they are all parallel to one another because you are trying to give hope and inspire,” Ricard said. “You give them the tools and try to work on those tools. Some people get it quicker than others, but the great coaches are the ones who are able to pick up the ones who don’t do it as well and make them great at it or better at it. Those are the really successful ones.”

Ricard said his focus is on the person, not the player.

“Not everyone is going to be a Parade All American like I was. For some kids this is just going to be the end of the road once they get done playing high school. Your expectations for them are great and you want to make them the best they possibly can be and that is my whole coaching model.”

While he was initially brought into Hahnville this spring as the defensive backs coach, he switched over to his more natural position as quarterbacks coach earlier this year and was recently named offensive coordinator after the departure of longtime Saltaformaggio collaborator Frank Allelo a few weeks ago.

“Interestingly enough I had a couple of other schools that were courting me to get me to come, but I think it was the opportunity to work with (Hahnville head coach Nick Saltaformaggio) at the end of the day,” Ricard said.

“And then obviously I fell in love with Hahnville, but to work with a guy that won a state championship and learn from him and learn the things he does well and the things I probably do different than him and how they match up with one another.”

This bodes well for Hahnville’s offense as they move away from the triple option system Saltaformaggio and Allelo relied on in prior seasons, including their 2013 4A state championship with East Jefferson High School, and towards a more pass-oriented spread style offense.

The Tigers are changing the offense largely due to senior quarterback Mike Neal’s ability as a passer.

“He is a very accurate strong kid,” Ricard said. “I was impressed with just how much I have been able to give and get from him in reciprocation out there on the field. I’ve enjoyed working with him. He has so much upside. We just have to develop his tools and things he does well and things he doesn’t do well. We’ve got to keep working on those weaknesses. It has been a pleasure and a joy to work with him.”

Ricard said he feels the Tigers have the right players for the transition to move smoothly.

“We’ve just had a lot of success this summer and hopefully we’ll continue have more success as we get into the season,” Ricard said.

“It is not easy but they’re open and worked very hard trying to get it. So it has gone really well so far.”

Despite setting up and preparing his offense to pass more often, Ricard said the game plan will be fluid.

“You always have to evolve,” Ricard said. “I am not one of those guys who insists you have to throw it a certain amount of times or run it a certain amount of times. The team you play dictates the way you play. If they have a weak defensive line. we are going to obviously run the football. If they have a weak secondary, well let’s expose the secondary. That is the way we’ll play, it will be a week to week thing and depending on strengths and weaknesses and how healthy we are.”