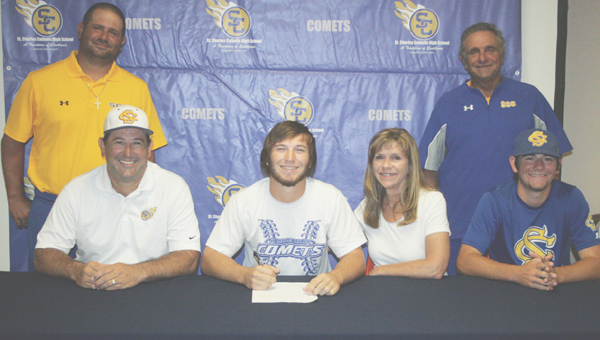 LAPLACE — The St. Charles Catholic Comets sent two players off to the college levels with a signing day held at the school Friday morning.

Comets pitching ace Austin Weber started at quarterback for the SCC football team for three seasons but is continuing his playing career in the baseball program at Enterprise State Community College in Enterprise, Ala.

Weber, who was named 2015 St. John the Baptist Parish Baseball  MVP by L’OBSERVATEUR, expects to play shortstop and pitcher next year for the Boll Weevils.

SCC running back Erron Lewis, at right, signs to play football with Mississippi College in Clinton, Miss. He is joined by his mother Melinda Lewis, left, and SCC head football coach and athletic director Frank Monica.

“I feel pretty good,” he said. “It is pretty much every kid’s dream to go play college baseball and I am glad I have the opportunity to go.”

Weber said the opportunity to play for Enterprise came up a few weeks ago after he visited the campus.

“I did a little workout for them, and they gave me a scholarship and I accepted it right there on the spot,” he said.

His long-term goal is transfer to a larger school.

“I want to play my two years there, hopefully get my grades better and try to go to a Division I school somewhere,” Weber said. “That is definitely going to be my first goal, get my grades up, and then also concentrate on baseball and try to go somewhere in the future.”

“He was kind of a Mr. Everything for us,” Stein said. “As a sophomore he played third base, as a junior he played catcher and as a senior he played second base. All of those moves were what were best for the team. That is something that is rare in this day and age — to have a kid that will do whatever it takes just for the team to win.”

Stein said Weber is one of the better baseball players he has coached.

“He had a phenomenal senior year, he never struck out in 50 games of high school baseball,” Stein said. “That is something I’ve never experienced, and he is going to be somebody that we are definitely going to miss.”

The 5-foot-10, 200-pound football star played tailback for the Comets racking up 1,200 yards and 20 touchdowns his junior year and putting in a similar performance in his senior year.

“This will be the fourth kid we’ve sent to Mississippi College,” Monica said. “That has been a good thing.”

Lewis was the only football player from last year’s SCC squad to sign a scholarship offer.

While he has had quite a few players signed out of the school in his two decades as SCC head coach, Monica said most have gone to smaller schools like Mississippi College.

“We haven’t had that SEC-type player, but as long as they get their education paid for and get a chance to play, that is still the most important thing,” Monica said. “Because the field is still 100 yards long. It doesn’t matter what level it is.”

Monica said he is proud of Lewis’ accomplishments and the fact he is moving on to play at the next level.

“Athletics is a very important, integral part of the school,” Monica said. “I’ve always considered athletics to be a breeding ground for a lot of other things, to teach the value system. Hopefully the kids will learn from that and hopefully it shows other kids if you work hard you can extend your career.”