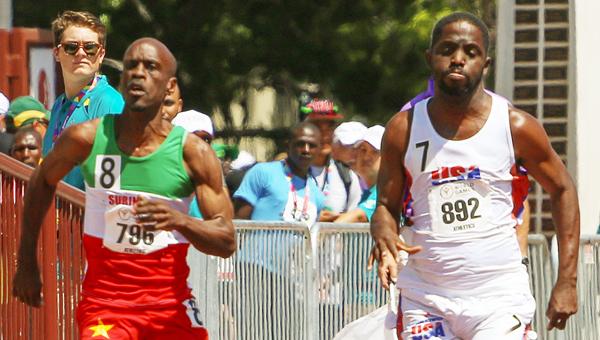 Theodore ‘T.C.’ Bazile, right, is seen racing down the track for Team USA during the 2015 Special Olympics World Summer Games in Los Angeles. Bazile earned a bronze medal in the 4x100 relay.

ST. JAMES — When the best in the world took the medal stand in Los Angeles, St. James’ Theodore “T.C.” Bazile made sure the River Parishes were well represented.

Bazile, 41, brought home a bronze medal in the 4×100 relay, while also taking home a fifth place showing in the 200-meter run and an eighth place finish in the 100-meter run while competing at the 2015 Special Olympics World Summer Games.

Bazile, of St. James, was the only Bayouland area athlete to compete and one of only four Louisiana athletes to make the trip to California. The Louisiana delegation also included a unified partner and one coach.

President & CEO of Special Olympics Louisiana Pat Carpenter Bourgeois said she was proud of the state’s athletes who participated, adding some accomplished personal best scores while finding out the competition is very tough at the World Games level.

“The USA coaches were very complimentary of our athletes, their exceptional sportsmanship in the way they conducted themselves and how much fun our athletes were,” Bourgeois said. “They all had a unique experience and represented Louisiana well.”

Bazile’s showing at the world games followed an amazing performance in 2014 at the Special Olympics USA Games in New Jersey. During that competition, Bazile finished first in the shot put, 4×100-meter relay and 400-meter run.

That showing catapulted him to California, where last month he was joined by 30,000 volunteers and delegates from all over the world that attended and competed in the 2015 World Summer Games.

Organizers estimated about a half million spectators were also present.

The organization puts on health, education, leadership, family, training and sports programs for people beginning at age 2 and there is no upper age limit.

There is no cost to participate in Special Olympics.