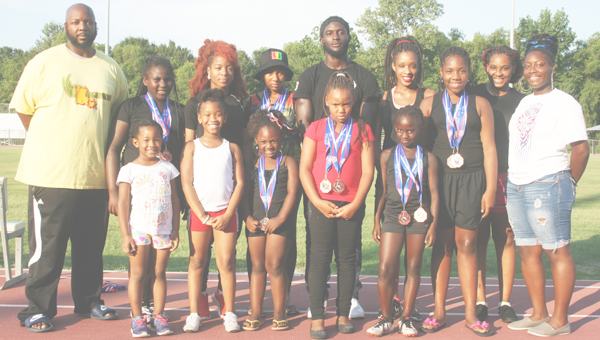 RESERVE — Over the past three years East St. John High School head girls track coach Mark Creecy has helped send more athletes on to Division I college track programs than the rest of the school’s marquee sports programs put together.

Creecy said track is often overlooked, but it can provide big results.

“People kind of look at track as a back burner sport,” Creecy said. “The past three years that I have been associating with the girls and boys we have had over 15 kids sign Division I scholarships. That is more than football, basketball and baseball combined.”

When figuring in the kids who have signed scholarships offers with Division II schools that number surpasses 20 athletes. According to Creecy, much of that success hinges on training offered throughout the year, including in the summer with the Amateur Athletic Union (AAU) track program, the St. John Legends, he started two years ago.

“We just have a lot of kids that have moved on and out of this group to college I am sure I am going to have a lot more,” Creecy said.

Not only does the AAU program offer the opportunity for offseason training and competition, Creecy said it keeps kids busy and provides them with a positive activity during the summer months.

“It gives kids an outlet and a chance to participate and do something during the summers,” Creecy said. “We practice Tuesdays, Wednesdays and Thursdays and track meets are on Saturdays.”

Monique Gray is one of the athletes who went through the AAU program before receiving a track scholarship to the University of Mobile, where she participates in shot put and discus.

Gray said being able to participate in the summer program kept her at the top of her events and certainly played a role in helping her secure a college scholarship.

“It is a big deal, it helps because it was a lot of practice for me,” she said.

Gray came back this summer to serve as assistant coach for the St. John Legends.

“It is huge because some people grow up and they don’t want to go to college, and if they see me doing it, they’ll want to do it too.”

The AAU program serves children in St. John the Baptist Parish ages 4 to 18.

The Legends are non-profit organization that employs multiple fundraising methods in order to travel to track meets.

“We’ve done the can shake, we’ve done car washes and talked to some prominent business people in the area,” Creecy said.

“A piece here and a piece there and it kind of adds up.”

At the National Championships the Legends athletes competed against hundreds of other track athletes from across the nation. All of those who finished in the top eight places in their events were named All Americans.

Several of the Legends participating in the National Championships did well in their events.

One of the better performers for the Legends, incoming ESJ senior Dontrell Allen, competed in the early heat for the 100 and 200 meter sprints, but was unable to stay for the entire competition due to Mississippi State football camp. Still, based on his early times he was able to qualify for the AAU Junior Olympics.

While Allen’s first sport is football, he is expected to run track in college as well.

“He is definitely a two sport athlete,” Creecy said.

The AAU Junior Olympics will be held today through Aug. 8 in Hampton Roads, Va.

Those who would like to donate to the Legends or join the team for the next season can do so by contacting Coach Mark Creecy by phone at 985-212-7295.

Barnett: Ready for gridiron action yet?