Do YOU have the River Region’s best preserves? 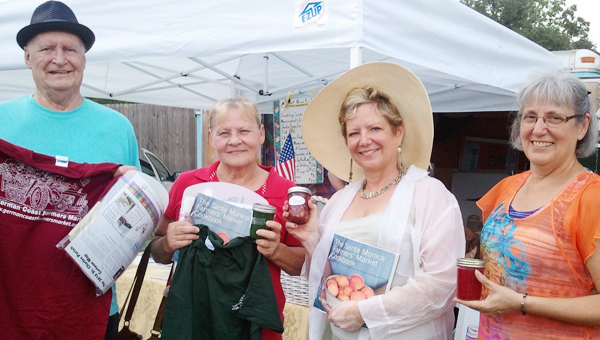 Winners of the 2013 Preserves Contest at the German Coast Farmers’ Market show off their prizes.

DESTREHAN — Ormond Plantation will serve as the backdrop when the German Coast Farmers’ Market holds its annual Preserves Contest at 10 a.m. Saturday.

Ann Montgomery, vice president of the market’s board of directors, said judging criteria will include the quality and appearance of the preserves. Participants can register Saturday at the market’s welcome booth up until the start of the contest.

Founded in May 2003, the market was established to help farmers and small vendors reach the public directly with the freshest of produce and homegrown and produced products.

Montgomery said the market has been holding the Preserves Contest for five or six years, adding people who preserve as a hobby annually enter their products, which have included strawberry, fig and blueberry preserves.

To participate in the contest, Montgomery said products must be labeled to include the name of the preserve, along with the month and year it was made. Entries must be self-preserved by the contestant, and participants must register and pick up guidelines at the welcome booth prior to the contest. The market opens at 8 a.m., and judging will take place at 10 a.m.

“Come out and bear the heat,” Montgomery said. “You won’t be sorry.”

She said the market is “one of the gems of our parish that so many have not taken advantage of,” adding the plantation setting of the Saturday market is another reason to visit.

Prizes will be given to contest participants, Montgomery said, adding the market’s board is constantly looking for contests and events to host and introduce new people to the market.

A home-grown vegetable contest, Halloween costume contest and St. Patrick’s Day pet parade are some of the annual market offerings, which Montgomery said are offered to “invite people to come that may have never been or invite them to come back.”

The farmers’ market is held from 8 a.m. to noon every Saturday at Ormond Plantation, located at 13786 River Road.

The idea for the development of the market originated with the German Coast Community Heritage Group, which sought to celebrate the living tradition of farming passed on informally within the community by families and community members.

The inaugural market was held on the East Bank of St. Charles Parish in June 2003, and in July 2006 the second location opened on the West Bank of the parish.

The German Coast, one of the oldest settlements in Louisiana, was a settlement located on the east side of the Mississippi River, specifically in present-day St. Charles, St. John the Baptist and St. James Parishes.

For more information and to sign-up for the market’s newsletter visit germancoastfarmersmarket.org.

The market’s Facebook page can be found by searching “German Coast Farmers Market.”