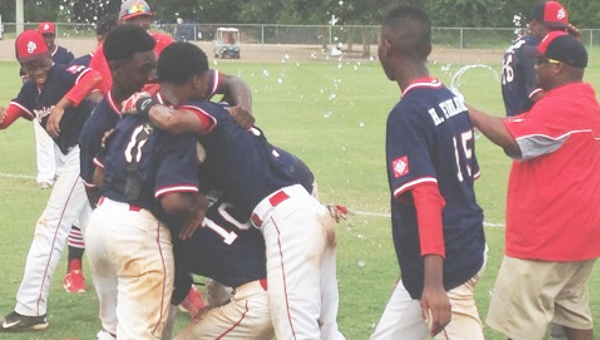 RESERVE — The 14-year-old Warriors All Stars bus received a raucous welcome when they returned to St. John the Baptist Parish from Southaven, Miss. Thursday with their third Dizzy Dean World Series championship trophy in hand.

A police escort met the Warriors charter bus at U.S. 51 in LaPlace and cleared the path for their triumphant return to Regala Park in Reserve.

A large group of parents and community leaders gathered at Regala Gym to congratulate the team on their victory.

The group clapped their hands, stomped their feet and cheered on the players repeating the refrain of a popular cheer, “We, we are so proud of you!”

The 14-year-old All Star Warriors represented St. John the Baptist Parish’s Parks and Recreation department in the championship.

Head coach Wayland Martin said the tournament win was hard fought. Martin has been coaching the team for seven years, since their 7-year-old season when they went 0-22 all the way into the past few years, when they put together three World Series Championships including back-to-back championship in 2014 and 2015.

“They’ve got great athletes in St. John Parish and the best is yet to come,” Martin said. “They are a great bunch of kids. I’ve been doing this a long time and this is one of the best teams I’ve ever had and what a way to finish the season.”

On Tuesday, the first day of the tournament, the Warriors won three games straight with a 7-4 win over Irondale, Ala., a 20-5 offensive thrashing of Plaquemines Parish and a 8-0 shutout of the Tallahassee, Fla. All Stars.

However, on Wednesday, the second day of the tournament, the Warriors faltered.

“We lost to Irondale 16-7, but with us being undefeated and going to the championship they had to beat us twice,” Martin said.

Given the tournament was double elimination the Warriors had to be beaten back-to-back in a doubleheader.

Following the loss, Martin said a few of his ballplayers led a charge to regroup before one final game and a last chance against Irondale for the championship.

“By them playing together, by them knowing each other and playing with each other for a while one thing I can say about them is they don’t quit,” Martin said. “From there they hung their heads down a little bit after they lost to Irondale, but a couple of the ballplayers called a little meeting and they came out first.”

While pitcher De’Jon Muhammad was mostly ineffective in the first game of the championship versus Irondale, Martin said he bounced back in the second to help secure the victory 16-4.

“(Muhammad) started the first ballgame against Irondale and didn’t throw well,” Martin said. “But we went back to him the second ballgame and he had a no-hitter going into the fifth inning.”

Muhammad said he was happy with the result.

“We worked hard and stayed together as a team and didn’t let each other down and fortunately we came back,” Muhammad said. “It was a great season. I am proud of my team.”

Warriors third baseman Jikari Martin was given the MVP award for the tournament based on his phenomenal fielding skills.

Martin made several tough plays at third base, snagging line drives and throwing out several runners throughout the series.

Jikari Martin said he has been working on his fielding technique for years.

“I’ve been playing hard and practicing hard every day,” Jikari Martin said. “It finally paid off. I work on myself in practicing defense. That is mostly what I focus on.”

The 7-year-old Warriors All Star team also participated in the World Series tournament, but were unable to advance past the first round.

The 8-year-old Warriors are currently in Southaven, Miss. vying for the World Series championship.

Swim season comes to an end: LARAYO repeats as…