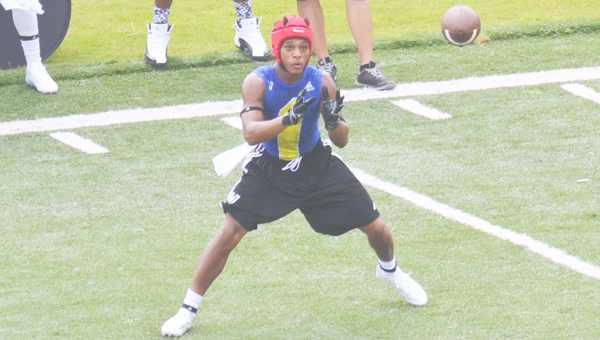 The regional tournament consisted of 12 teams from Louisiana, Florida and Georgia that finished in the top four in the Adidas/Airo 7-on-7 state tournaments. West St. John received a spot in the regional, and an all expenses paid trip, by finishing fourth in the Louisiana tournament held in Gonzales in late June in which around 50 teams participated.

The regional tournament marked the first competitive play the Rams have been involved in since the abrupt departure last week of head coach Robert Valdez and offensive coordinator Kris Peters. Valdez is leaving to take over as head coach Scotlandville in Baton Rouge.

Marcus Boudoin and Wonzell Dumas force out a receiver.

The Rams did just that getting off to a great start by winning three straight games and going undefeated in pool play on the first day of the tournament Friday.

On Saturday, the Rams won over Palm Beach Gardens, Fla.-based Dwyer before losing 21-16 in the quarterfinals to eventual tournament winner Jacksonville, Fla.-based Ribault.

“We performed well, the kids played hard,” Davis said. “We were actually up with five minutes left to go in the quarterfinal. The other team made a few plays. We competed well, went out there and had a good showing. We had an opportunity to advance and it just didn’t happen at that point.”

Despite the loss, Davis said he was pleased to see how his players handled play against out-of-state opponents.

“It was a great experience and a great opportunity to get out of Louisiana and play against other competition and I think we did well,” Davis said.

Quarterbacks coach Derek “Skip” LaMothe, who called plays in place of the departed Peters, said West St. John was by far the smallest school in the competition.

“They were bigger,” LaMothe said. “They were all 4A and 5A we were the only small school there.”LaMothe said the level of competition was high.

“(Ribault) did a good job of executing,” LaMothe said.

The tournament marks the end of West St. John’s 7-on-7 competition for the summer.

However, first the school will have to pick a successor to Valdez first.

St. John the Baptist Parish Schools Superintendent Kevin George said the school will elevate one of the assistant coaches to interim head coach by the end of the week.