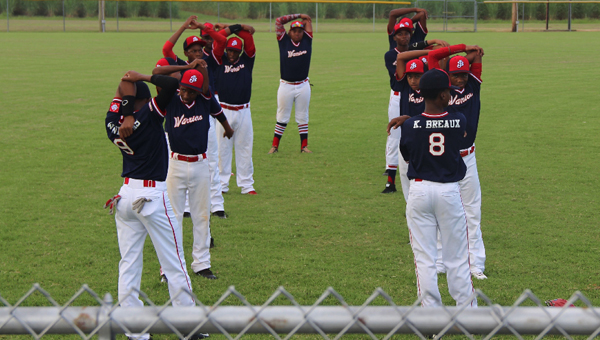 The 14-year-old boys went from 0-22 at age 7 to winning two World Series and vying for a third. (Submitted photo)

The 7, 8 and 14-year-old All Stars won their entrance into the World Series by sweeping Plaquemines in the state tournament last weekend.

Head coach of the 14-year-old All Stars, Wayland Martin, has been coaching for 27 years.

The Warriors 7, 8 and 14-year-old All Stars play in the World Series in Southaven, Miss., today.

“This is probably one of the better teams I’ve ever had,” Martin said.

The 14-year-olds are the reigning Dizzy Dean World Series champions, having won as 13-year-olds as well as two years before as 11-year-olds.

Last weekend they received entrance into yet another World Series following a hard fought win over Plaquemines. After taking the first game decisively 9-1, the 14-year-old Warriors took the second into extra innings and into the night before ending it 10-9 in the ninth inning.

The 14-year-old Warriors, who were 22-12 over the summer, have been a long-term project for Martin, who has been coaching them for the past seven years. In the first season Martin said he questioned why he was even still in coaching.

“I remember seven years ago this team hadn’t won a ballgame — they went 0-22 in that season,” Martin said.

However, Martin did not give up on his players.

“Hard work pays off and we worked hard on them,” Martin said. “Before you know it they were 9-years-old and we went to Tupelo, Miss. and finished fifth out of 32 teams and we knew we had something. We just put it together and kept working hard.”

Now, while he is looking forward to the World Series, Martin is hesitant about trying to predict how his team will do.

“It is not going to be easy, because there are a lot of good teams from Georgia to Florida and Alabama,” Martin said. “But if we go in there and play our best and win I think we’ll be in hunt. We’ve got some good athletes on this team. The kids play well together.”

Head coach of the 8-year-old All Stars Eric Perrilloux said he is confident his team is ready to go far in the World Series this year. This marks the team’s third trip to the World Series event, including trips when the team was 5 and 7.

To prepare for their success this season Perrilloux said he put his team through arduous training. The 8-year-old Warriors went 12-3 in the regular season.

“We had a lot of practices — some of the parents may have gotten mad at me,” Perrilloux said. “Before the season even started we might practice six days a week and I let them be off on a Sunday. Now it has paid off. We are ready to go.“

Perrilloux, who has coached the team for four years, said he knows his team has the talent to win the national championship.

“I have a really special group of kids,” Perrilloux said. “I have been coaching for 12 years, and believe it or not, out of 12 years I think this is the best team I’ve had.”

The 7-year-old team is led by head coach Tedric Anderson. Anderson said he is impressed with the improvement his team, which went 10-5 this season, has achieved since last season.

“It’s incredible,” Anderson said. “Last year we were a 6-year-old team and we looked like the Bad News Bears. I think every coach goes through that stage. But then they get better as they get older.”

Anderson said he feels confident his team is comfortable that they will win.

“I want to win it all, of course, every coach does, but I just encourage my kids to go out and have fun,” Anderson said. “It’s not really about winning and losing.

“Of course we want to win, but if my kids just go out and play and have fun, there is a 99.9 percent chance we’ll win.”

To get as far as they have, Anderson, who is a first time coach, kept his message to his players simple.

“There are three rules I have,” Anderson said. No. 1 — no crying on the diamond; No. 2 — always listen to coach and No. 3 — Always hustle. If you listen to those three rules, you’ll be successful.”