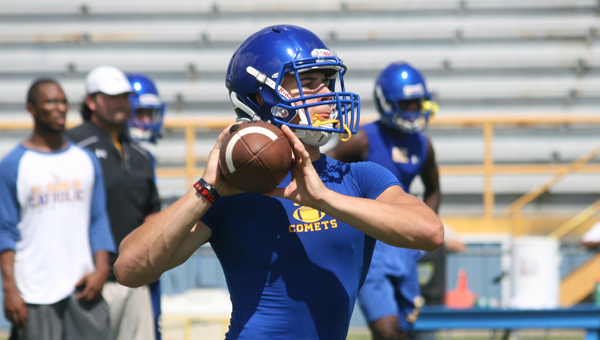 Quarterback Patrick Ratliff, who will lead SCC this year, prepares to zing a pass to a receiver at the end of 7on7 league play. (Kyle Barnett/L’OBSERVATEUR)

LAPLACE — As the St. Charles Catholic Comets football team closed out their annual 7-on-7 league head football coach  on Wednesday, Frank Monica seemed much more pleased with his team’s performance than in weeks prior.

With the passing of the years Monica has come to rely on the annual league to give his team’s skill players — quarterback, running back, wide receiver, on offense, and the secondary and linebackers, on defense — much needed practice prior to full team practice beginning in only a few weeks.

“We got a lot of work in and had a lot of activity — we didn’t have one rain out — and we got a bunch of reps,” Monica said. “So hopefully those reps pay off when we get to camp.”

Strong safety Justin Ory battles over a pass with a De La Salle wide recevier. Ory would tip the ball to a teammate, who intercepted it. (Kyle Barnett/L’OBSERVATEUR)

The no-contact league consists of passing only, with offense and defense sparring over and contesting passes and defenders only needing to lay their hands on a player to end the play.

Meanwhile, the quarterback is only given 3.8 seconds to make a throw or else the play is considered a sack.

While Monica said SCC only passes the ball 20 to 25 percent of the time, he feels it is important to provide his players with every opportunity to practice the passing game.

“If we’ve got to throw it, I want to be able to throw it 40 times. Whatever it takes for us to move the ball. We are not locked in to doing one thing, we are not one dimensional.”

The 7-on-7 league this year was particularly important given the Comets lost 11 seniors since last year’s semifinal finish, including quarterback Austin Weber who had 2,000 combined yards and running back Erron Lewis who accumulated 1,000 yards on the ground.

“We lost about 3,000 yards of offense real quick,” Monica said. “Hopefully we can spread the ball around a little bit more and get it to our wideouts and hand the ball off.”

Weber has been replaced by Patrick Ratliff, who looked sharp in 7-on7 play, but Lewis’ absence as a feature back is still being felt.

“Hopefully we can spread the ball around a little bit more and get it to our wideouts and hand the ball off,” Monica said. “We’ve got a couple of capable running backs.”

On the defensive side of the ball, Monica expressed relief that the team is returning its entire starting secondary from last year.

Midway through 7-on-7 play, Monica was displeased with his team’s performance on both sides of the ball, but by the end of the six-week league he felt the Comets play had tightened up.

“I think with another week away the players realized the sense of urgency they needed to have,” he said. “Still, before the first game six weeks from now, Monica said there is still a lot of work to be done.

“We are going to have to play well early. Our district is going to be rugged enough because in our district we have people like West St. John, Riverside, Newman and Country Day — so our district will be highly competitive.”

The Comets are scheduled to begin summer camp with the full team in the beginning of August in preparation for their season opener at Thibodaux on Friday, Sept. 4.

Barnett: Take the moment for what it is worth